Boston Groupie News and Boston Hassle recently chatted with us about our 10 year anniversary celebration Rama Lama Ding Dong. Click the links to check out the interviews and a 3 night pass to all three shows. The festival is happening this Thursday (Lilypad), Friday (Dorchester Art Project), and Saturday (Cambridge Elks Lodge). If you go for an advance ticket you’ll receive any KLYAM release of your choice! 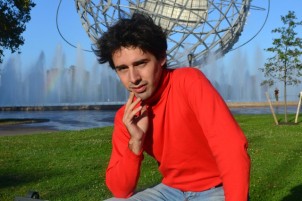 TAPES
American Whip Appeal – Nevermind tape – Mischief country/country glam trio originating in Newton, Massachusetts. We put our their Live In New York ditty a while back and they wasted little to no time congregating for a spontaneous ‘gospel’ record. The quotes are necessary; these kind folk spend a good chunk of their livelihood in New Orleans, Louisiana.

The Glue tape – The mysterious Glue, oft hailed on this very site as one of the most exciting NEW local bands, is getting together for a Last Chance record production. YouTube viddies and the irregular show have kept us satisfied, but imagine a tape of the hits? Cello, bass, keyboard, voice. Oozing passion. Get ready.

Bong Wish – Songs under a Minute tape – Stated best by Mariam: “These were all made on a PC computer from 2010-2011.. I had this generic program called “Sound Recorder” that only allowed you to record up to a minute..so that’s essentially why the songs are all under a minute. I also used headphones to record everything. Was heavily influenced by Guided by Voices and Beat Happening at the time. I was still in the process of teaching myself guitar, I didn’t know you were supposed to tune a guitar so I just played whatever sounded interesting to me.” If that’s not amateurism in its perfect nature, I’m not sure what is. This is a special tape.

The Migs tape – We’ve been sitting on a comprehensive Migs compilation for three and a half years. Waiting for just the right moment to release it to the world. It’s coming. You bet.

SEPTEMBER 28 to OCTOBER 1 – GONERFEST 14 – Memphis, Tennessee – Simply stated the best rock ‘n roll festival in existence. Line-ups featuring some of the more exciting groups from all over the world. Headlining this year (Thursday night) is our Boston brethren, late ’70s punk heros and one of papagiorgio’s favorites – Unnatural Axe. Friday night headliners are some Aussies called feedtime and Saturday night we’ve got Derv Gordon (of the Equals). But those night time Hi-Tone shows are like dessert during this bender with weekend afternoon shows at Memphis Made and Murphy’s. And there is nothing like strolling into the famed After Parties at 2 AM. In between all the music there is so much to do and so little time. This is Memphis and there is still time for you to hitch a flight and check out what we rant and rave about every year.

SEPTEMBER 28 to SEPTEMBER 30 – Boston Fuzzstival 2017 – Boston, Massachusetts – One of our favorite local festivals for a few years now, this three day event is in its 5th year, and is curated by the trustworthy Jason of Illegally Blind. Bummer it has to be the same time as Gonerfest, but what can you do. Expanding beyond the primarily garage/psych niche of the initial runs, these gigs are jam packed with local up-and-comers alongside mainstays.

OCTOBER 6 – Johnnie & The Foodmasters/Dylan and the Ded Beets/_HighlightReel/Picnic Lunch – Cambridge, Massachusetts @ Club Bohemia – As you know, every now and then, or maybe “most of the time,” we KLYAM like to throw some weird shows. This is one of them – almost like a mini/smelly club version of our Mouth is a Mouth Noise fest. New Bedford’s PICNICLUNCH is an offkilter outfit, ramshackle, maybe but maybe not put-together post punk cubed. Happy to have them up for this one! Going further down the odd rabbit hole is _HighlightReel. We know jackshit about experimental (dance?) music, perhaps our most deviant foray since Field of Sheep graced Club Bohemia’s presence at one of our shows a couple summers ago. Dylan and the Ded Beets might be playing their first show? It might just be a one man band? Sounds like a deranged early Ty Segall or the reincarnation of the Maine Coons. Yup. The mystery can’t wait much longer. And the “two year anniversary” of Johnnie & The Foodmasters. You’ve seen the name, maybe you’ve seen them. There is the intersection of the musical and the nonmusical, bla bla bla but for the less descript – there is the proliferation of oldies, good time tunes. Love us, hate us, bye!

OCTOBER 7 – Crocodiles/St. Pe/Boston Cream/Second Becky – Cambridge, Massachusetts @ First Parish Church. Former lead guitarist of Black Lips stepped away from our favorite group a couple years back and turned his focus to his own music, which he had called The Fixed Focus, but is now known as St. Pe. He kept Fixed Focus for the name of his first album which dropped earlier this year. Now Ian is on the road, touring with poppy noise advocates Crocodiles. We’ve been tracking St. Pe ever since he casually released a music video for a song called “Movin On Up” in 2011. He was like a recklessly wild step-brother in the Black Lips with primetime quotes and a ubiquitous friendly spirit. His new stuff seems to be dialed back a bit, but rest assured this Ian guy is one helluva performer that we’re pumped to see play once again. And we’re pumped to see Boston Cream, a bonafide local music supergroup, as well as Second Becky, who we last saw play at Night 1 of the first Rama Lama Ding Dong.