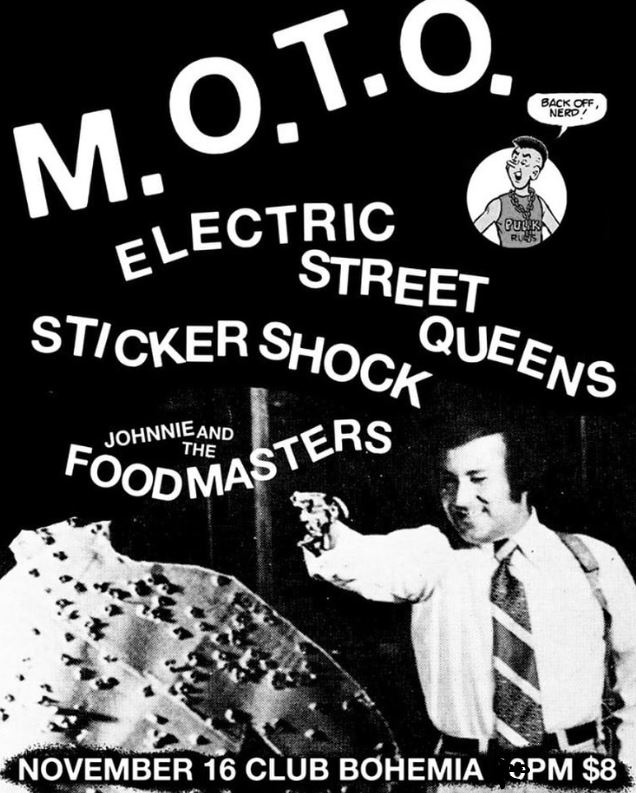 It is high noon for the second to last KLYAM show of the year. First, the details. Saturday November 16 at Club Bohemia in Cambridge’s Central Square (very accessible by public transport, bike, car, whatever). Plan on arriving at 8:30 or 8:45 PM. Hand over $8 in cash and make your way down the steps to Mickey Bliss’ dank dungeon. Electric Street Queens – KLYAM alum from way back (2014’s Live From Your Dreams tape) – will start things off. They released Thank You Good Night this past summer. Their line-up has changed a bit over time, but their infectious and explosive live performance has not. Perfect way to start this wild night. Next up is Sticker Shock. They are a local KLYAM favorite for sure – a band that would fit in perfectly on a Gonerfest bill wedged between Trampoline Team and Sick Thoughts with that high gear, high speed attack. Speaking of Gonerfest. Less than two months ago, M.O.T.O joined the Memphis fest’s prolific progeny of relatively obscure, but ultra beloved performers. And we got to see them in action. Since then we’ve been dying to get Paul Caporino and crew on one of our shows and sure enough here they are headlining this one! I think I read somewhere that everyone has a favorite M.O.T.O song, but the back catalog is so damn extensive it might be near impossible for them to play all the favorites.  What a great problem to have! After M.O.T.O will be Johnnie and the Foodmasters. M.O.T.O is a tough act to follow, so the Foodmasters will have to ride off the high of that set and hopefully not clear the room. The oldies noise-mongering sextet are hoping the Boomer who called them the worst band Cambridge has seen in 40 years comes out to the gig. 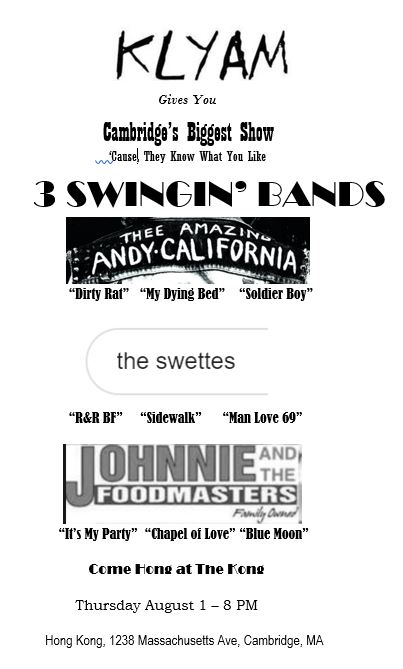 TAPES
American Whip Appeal – Nevermind tape – Mischief country/country glam trio originating in Newton, Massachusetts. We put our their Live In New York ditty a while back and they wasted little to no time congregating for a spontaneous ‘gospel’ record. The quotes are necessary; these kind folk spend a good chunk of their livelihood in New Orleans, Louisiana.

The Glue tape – The mysterious Glue, oft hailed on this very site as one of the most exciting NEW local bands, is getting together for a Last Chance record production. YouTube viddies and the irregular show have kept us satisfied, but imagine a tape of the hits? Cello, bass, keyboard, voice. Oozing passion. Get ready.

Bong Wish – Songs under a Minute tape – Stated best by Mariam: “These were all made on a PC computer from 2010-2011.. I had this generic program called “Sound Recorder” that only allowed you to record up to a minute..so that’s essentially why the songs are all under a minute. I also used headphones to record everything. Was heavily influenced by Guided by Voices and Beat Happening at the time. I was still in the process of teaching myself guitar, I didn’t know you were supposed to tune a guitar so I just played whatever sounded interesting to me.” If that’s not amateurism in its perfect nature, I’m not sure what is. This is a special tape.

The Migs tape – We’ve been sitting on a comprehensive Migs compilation for three and a half years. Waiting for just the right moment to release it to the world. It’s coming. You bet.

We are very excited to announce our next show! It is May 22nd (10 PM), another fantastic Rad Castle Monday night event at ZuZu in Central Square, Cambridge. Proud Parents from Madison, Wisconsin, and on tour!, are making a stop here and we are lucky to hear them perform! I am sure many of you remember a couple of years ago, The Hussy (also from Madison) played an unforgettable set at ZuZu. Our pals Heather from The Hussy plays drums/sings in Proud Parents and Tyler from Fire Heads – who were all set to play ZuZu until a bad snow storm hit – plays guitar/sings in the band. Please head over to their bandcamp and enjoy their infectious pop rock ‘n roll. I insist!

Also playing are firebrands and frankly one of the most exciting groups to emerge out of Boston in the past six months or so — PEACH RING. I would head on over to YouTube where the micro-legend Front Row Person has filmed them on a few occasions, including our Feb 4th gig at Club Bohemia.

Lastly – G. Gordon Gritty – hasn’t shown its (my?) sloppy head(s) in these parts since September. Grab your musical handbook, a pair of scissors, and a lighter.

We are kicking off our 2017 show series in what can only be described as TYPICAL KLYAM FASHION. We let you off the hook in January, but look at this one. Saturday February 4th at Club Bohemia. Yup, the downstairs of the Cantab Lounge on the edges of Central Square in Cambridge. We’ve thrown several shows at the palace of Mickey Bliss.

You read that right, too. It’s the return of Johnnie and the Foodmasters. Who? The KLYAM House Band. The wildest, noisiest devotees of the golden oldies era of rock and pop music. There is the Yin and Yang dynamic of the clean and professional and the raw and amateur. It is a sight to see and with tremendous bias, I can say that.

We’ve curated an all-star lineup in support of the Foodmasters return: JIM LEONARD. Rock and roll juggernaut, back from Scotland. He’s been doing his thing for years, in a variety of iterations. Top notch on record, top notch live. THEE CAVEMYN – back to the basics rock and roll. Primitivalia as I have termed it. Boom doom BOOM. That riff. The line-up has seen many varieties, fuck I even used to react in it, but this latest one is a contemporary Boston underground supergroup featuring members of Nice Guys, Big Buck Hunter, Birthing Hips, and a newer group that is playing this show – PEACH RING, another contemporary Boston underground supergroup. We’ve never seen them, but oh we’ve heard them and we are excited for the noiseeeee!!!!!!!!!!!!

KLYAM will be spinning records and I might introduce the bands in some MC capacity. 21+. $8. 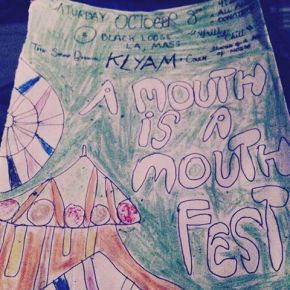 A Mouth’s A Mouth Fest Part 2 – no lofty goals of unifying a scene or showcasing the greatest talent in noise around these parts. Not quite. The idea is a fun, autumn afternoon into the night intimate, dank festival outside of the tame curated world of pop and rock musics.

(-1) – Featuring a cast of long-time Boston weirdos with band associations that’ll make any one who has been paying attention to this town’s heavy, loud, and experimental rock ‘n roll of the past decade, that’ll make these people perk up in joy. Members of Bugs and Rats, Particulars, Exusamwa, Needy Visions. Guess the people. Anyway, Feeding Tube Records just released their debut 7″ and its a screechy hardgory winner. (Listen)

ID M Theft Able – Storied sound artist from Maine – if you like to research shit beforehand, go ahead now and type in ID M Theft Able into YouTube and get ready to be transported. This performer need not any electronic get-up to perform his noise, though these aids may factor in somehow. (Listen)

Fat Shuggy – Chances are you have heard or seen one Fat Shuggy in some incarnation or another, perhaps in his solo habitat as entrail princess. Who, what, when, where, and why, all things we are trying to still figure out. The entrail princess is a bit like a beast trapped inside of something very small, trying to escape. There is not a traditional way out. Halloween’s approach makes all the sense for this one. (Listen)

Mike Mountain – New Bedford master of the theater of the absurd. Quite possibly the most unpredictable of this bunch – he can and has dabbled in whatever he damn well feels like. (Listen?)

Asher Tuil – Somerville scaper of the ambient, the lush, the spacey, he’s been at it for a good chunk of time,  even was written about in the Boston Globe a couple of years back. A strap yourself in, relax, and enjoy, experience. (Listen)

The Craters – Perhaps the most traditional group on this billing, the baby of Wes from The Channels, The Craters are a different animal than that ‘un, maybe in some spots comparable to the output of early Deerhunter, but with a penchant to explore deeper and more experimental realms. And with a prolific amount of homespun music on the web…you can endeavor to explore all of it! (Listen)

G. Gordon Gritty – The man who destroyed music – me! And my band. Apparently our last performance at ZuZu was “tight” and “better than ever” — what will this one be? I just got back from Gonerfest, but I’ve been on a methaphorical Gonerfest since 2009. What? Okay, see ya. (Listen)

Reminding all Boston area KLYAMers, come on down!

Kids Like You and Me Present………….Gangbang Gordon’s live debut! Local heroes The Roaches and Rhode Island’s finest garage rockers, Atlantic Thrills, cap off the bill. The Thrills have opened for Thee Oh Sees, The Black Lips, The Vivian Girls, Those Darlins, and many other bands. This is going to go down in history as a legendary show, so you don’t want to miss it!