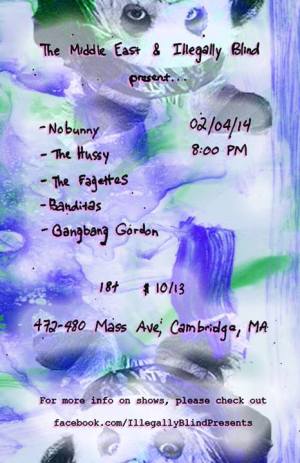 GBG sings lead vocals and strums on guitar, being accompanied by his WTF (Wakefield Track & Field of course) band which includes Brian Hickey on guitar, Dan Gerry on bass, Justin DeCarlo on drums, and Ben Tan on tambourine. While GBG resides on the floor, the backing band holds the fort on stage. Mr. Tambourine Man, Ben Tan, however, often hops back and forth, “dancing” and intimidating the crowd of puzzled on lookers.

Bewilderment is nothing new at a GBG show. That reputation is solidified here as the would be gangbanger careens around the Middle East venue, bopping into the audience, wrapping himself around poles, and singing directly to individual members of the crowd. It’s odd, but it’s still showmanship and I’ll give him that. It’s better than watching someone perform “for the people” as if they are some demagogue, above everyone else. GBG  plays with the people, he plays with their minds. He gets his hands dirty, filthy.

In terms of the band, you have a variety of players. Some are seasoned pros, others are amateurs. Throw em’ together playing GBG songs and it can get messy. That being said, this is the best GBG has ever sounded and I will give the WTF band the credit they deserve. It’s a lo-fi, ramshackle that doesn’t care if you are a Boston college student or a teenager in an insane asylum. GBG and his manimal barebackers are here for you and they are here to stay.  Catch them before they catch you.

Of all the bands on the bill, Banditas are the easiest on the ears, though they still have some garage grit in them too. “When He Comes Home” has its country twang and stands out the most to me. They also perform a sick cover of The Stooges’ “No Fun.” Check out their music here: http://banditasboston.bandcamp.com/

The Fagettes – Fagettes are always an essential band for Boston punk slime shows. When we heard that the bunnyman and the hussyman were heading our way we knew the Gettes had to be playing alongside em’. If they weren’t, there would be riots in the streets I tells ya!

The dudes and dudette open with a newish cut entitled “Street Queens in Heat.” It’s fine and dandy, and the packed crowd of new and old faces are digging it. The next song is “On Drugs,” one of the quintessential Fagettes numbers. Just makes me feel sick in a very, very satisfying way. Just look at the lyrics. “Take me back to your place girl and I’ll show you the atomic bomb. ON DRUGS.” Love it!

They conclude the set with another vintage tune known as “I Wanna Feel Good.” As do I fellas, as do I. Ryan hops off the stage and walks through the crowd, staring through all of our souls. Eerie. http://thefagettes.bandcamp.com/

The Hussy – That’s Bobby (vocals/guitar) and Heather (vocals/drums), and don’t forget it. The Hussy are a two beast – a rock ‘n’ roll two piece from Madison, Wisconsin that sends most two pieces crying for their mothers. The Hussy have toured their Mid Western asses right off, releasing a shit ton of records and tapes along the way, but this here tonight is their Boston debut and they destroy! Bobby even burns his guitar apparently. I don’t know how I could have missed this, but according to Glen it happened. Where is my mind?

What I do remember, however, is The Hussy rocking my socks OFF! For the first half of the set, the crowd is a bit stiff, sort of just doing the headbob and perhaps some headbang. Then not too long after “Undefined” the Bostonians start to move and dance and slam and bam about.

Quite the debut from Madison’s finest. I’ll kill to have another Hussy onslaught come my way again in the near future. Let’s do it.

Nobunny – NOBUNNY!!!!! KLYAM are Nobunny freaks  and it looks like we aren’t the only bunny freaks in attendance. Among the sold out crowd, there are somebunnies lurking around wearing their cute, little bunny masks. Yep, everyone loves Nobunny, unless you’re a killjoy. But, fuck those guys.

So yeahhhh, The Hussy come back for more, those crazy fucks. They back up Nobunny alongside another long, blonde haired gent. The quartet kick it all off with Secret Songs (2013) opener “Bye Bye Roxie.” And I’m always getting highhhhhh awww yeahhh!  The set list varies with blasts from the past – Love Visions (“I Am A Girlfriend,” “Chuck Berry Holiday,” “It’s True,” “Mess Me Up,” “Nobunny Loves You,”), First Blood (“Motorhead With Me,” “Gone For Good,” “Live It Up,” “Blow Dumb”), and my favorite, thee olde seedy, slutty, Sneaky Pinks anthem, “I Can’t Wait.”  I don’t think I ever screamed along so hard to the lyrics of a song at a show before. I just feel the pain. I identify with the words the bunny spits when he sings his song. I too cannot wait for forbidden love. Ahhahahahahaa, I swear officer, she told me she was thirty six!

EPITAPH:
The world is a fucked up place, I can’t change that. It’s a terrible place really. I don’t blame people that kill themselves or want to kill themselves, I’ve been there. But, maybe we can start by making the world a better place for them to live in first. We can make a better world (laughs from the reader). I’m serious though. Dead serious, so help me God. A great song to me is a perfect place,  a place where I can escape for a little while. These are the only songs I am interested in hearing. Nobunny makes trashy rock ‘n’ roll, but we live in a trashy world. Think about that.

I guess this  is the part of the review where I tell you what I’ve learned so far. I am confident in myself and all I can say is that rock ‘n’ roll should…

This video was shot by our buddy Joanna!

I recognize fan favorites such as “It’s A Damn Shame,” “Lost Touch (With The Youths),” and my fave “Life At The ABC (Abandon Bear Cages).”

His music is fairly diverse and this shows in his performance which includes a recorder, rap, and a drum machine. Way to go bro!  http://www.youtube.com/watch?v=TFbSUmVGj1c

The Dividers hail from New Bedford and they continue GBG’s trend of garage rock ode. I know, I know I get sick of saying garage too, but I mean this is a Burger showcase. Call it punk slime, if you will. The Dividers champion this style and spirit and they give my ears a fierce pounding. I hear that they have a history with our guys the Atlantic Thrills; it’s fitting. Both bands have played shows together across New England and both bands share the aforementioned slimy flavor of rock ‘n’ roll. The Dividers are fun and they get the people movin’ a little. They kind of remind of The Reatards, so yeah nasty, noisy “garage,” but easy to slam around to ya know? Course you do.  I recommend you check out their music here: http://www.reverbnation.com/thedividers

Fat Creeps are our top dogs, so it’s a real pleasure to see them up on the big stage at the Firehouse 13 in Providence. I always love seeing my favorite bands in foreign settings.  The sound is top notch and they dish out several of their classics like “Nancy Drew,” “700 Parts,” and “Secrets.” It’s cool to think that most in attendance proabably haven’t heard these sick tunes before,  and from what I observe everyone seems to dig it, especially one Kelly Riley (Atlantic Thrills). During some of the heavier pop songs like “Daydreaming” and “Going To The Party” I notice Kelly rocking out pretty hard, jumping up and down, reveling in his first Fat Creeps experience. Indeed, this trio is one of the best live acts I’ve seen. They also play a song they don’t play as often with  “Leave Her Alone,” an excellent surfy song,  which  is coming out on their upcoming self-titled 10″ release on our very own KLYAM Records! Listen to the digital version here: http://fatcreeps.bandcamp.com/album/fat-creeps-ep

Fat Creeps and Atlantic Thrills are two of our favorite groups, which makes this show real, real special. We’ve seen both  bands separately a gazillion times, but the two have never appeared on the same bill before. Needless to say, I’m extremely pumped to see the Atlantic Thrills in their hometown. The Firehouse is one of the best places to see the Thrillz do what they do best. Whether it’s Dan’s solo, “meat” playing as Glen would say, Josh’s passionate drumming, Eric’s heroic leaps, or Kelly’s manic behavior, the Thrillz are one of the most enjoyable live bands. There’s like this great fun, party atmosphere to them that is rarely matched, and it comes through not just in their physical performance, but also their music. There is an undeniable familiarity to their songs, we’ve all heard this sound before, but the Thrillz are such characters that they shine through any inkling of cliché.

Alas, this show doesn’t have the same crowd reaction (non stop moshing) as the last Atlantic Thrills show I saw at Wilder Zangcraft in Lowell. But , it’s all good, the Thrillz are just as awesome, people dance and have fun. One soul commends them for their “gang vocals,” I’m with you on that one brah. The Thrillz definitely have a particular quality of camaraderie to them, much like a gang or that of the oft-compared Black Lips. The band describes themselves the best: “Four badass muthafuckers who like to drink whiskey and play dirty garage rock”- http://www.reverbnation.com/atlanticthrills

I’ll be square with you guys, I don’t recall the last band Thee Itchies too well, my apologies! I’m sure they killed it.

Recorded in a single standing, no overdubs or flubs, fresh off the eight track, a time to reminiscence of proctors, late finishes, and improvement. Needs improvement.

Reminding all Boston area KLYAMers, come on down!

Kids Like You and Me Present………….Gangbang Gordon’s live debut! Local heroes The Roaches and Rhode Island’s finest garage rockers, Atlantic Thrills, cap off the bill. The Thrills have opened for Thee Oh Sees, The Black Lips, The Vivian Girls, Those Darlins, and many other bands. This is going to go down in history as a legendary show, so you don’t want to miss it!

G Gangbang Gordon is on a mission to release 75 tracks in 2011. He’d also like to go into a studio so that his listening audience will better be able to realize his talents. You see, he has a lot of ideas, but the limits of home recording and computer room trickery have really held back Gordon. He hopes to play a few local shows in the coming months. He has some top secret ideas up his sleeve pertaining to his live show. Y’all will have to wait and see. Here is Lean Front, his first EP of many in 2011. “Neptune” is a twangy solo-guitar son of a gun about going to the planet without your jacket. “Red Syrup” is Gordon’s most expansive effort to date, playing up his Jay Reatard influence and incorporating a range of instruments. “The Earth Is Flat” is an 8 minute trip down random lane. If you have the patience, there are many a surprise embedded in the tune. “Freebase Crack” featuring the likes of a spoon as percussion and looped whistling is about a young drug dealer of the awfully redundant freebase crack.

It’s about some kid living away from home for the first time in a shitty college dorm.

From I’m Not A Musician: