We are music nerds, music geeks, whatever you wish to call us. I prefer the term “radical nerd,” but whatever. We follow in the footsteps of a long list of Music (radical) nerds that have enriched all of our lives. We are a different branch of geekdom, often more socially acceptable than your average dork- often, not always. Instead of cherishing “World of Warcraft,” “Dungeons and Dragons,” and “Star Trek,” Our Band Could Be Your Life (2001), the oft-nauseating, but totally relevent blogosphere/message board apparatus, and endless hours of Sasha Grey videos are our treasureed jewels. Instead of spending are teen years chasing hunnies or developing better social skills, we spent entirely way too much time debating whether or not major labels were good or evil. We are the proud, the few… the few that actually give a fuck about whatever we’re yapping about. We may never sleep with as many women as Gene Simmons, but we will know how many women Gene Simmons has slept with (4,600 approximately). The following is a list of some of my favorite music nerds.

and who could forget…

Quote of the Week:
“I hope GQ as a magazine fails. I hope that all of these people who make a living by looking pretty are eventually made destitute or forced to do something of substance. At least pornography has a function.”

Secondary Quote:
“People put stuff on YouTube or torrent clients or whatever, not because they’re going to make money off of it, which is the only reason the mainstream industry would do something, but because they think it’s good. It’s a like a worldwide mix tape.”

Monday, September 6, Mr. Albini and crew will hit up the Mid East. Fuck, most likley I won’t be able to make this one, but I really want to! I hear they are awesome live, so if you have a chance, go.

Haha, I wonder what Albini would have turned into if he heard the Partridge Family; an ardent pundit on mainstream teeny bopper music!

Speaking of horrifying, disgusting behemoths, such as major labels, I thouhgt I’d post a link to Steve Albini’s harsh classic, “The Problem With Music.” I searched “Fuck Major Labels” on Google and this was the first thing to come up lol. I don’t agree with all of it, but he makes many good points and has the knowledge to back it up, plus it’s quite humorous in the Albini sense. 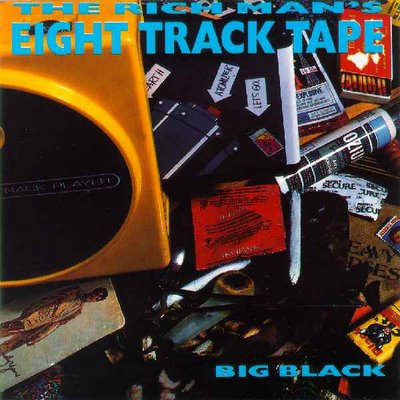 This record is a compilation consisting of the LP Atomizer (tracks 1-9), the single Heartbeat (track 10), and the EP Headache (tracks 11-16).

Comments: Having been a huge fan of Big Black’s magnum opus, Songs About Fucking, my thirst for pure fucking noise grew into dehyrdration. With RMETT I feel stuffed and then some! In terms of the chaotic nature of Big Black’s music, this compilation showcases head spinning material far more than SAF. Now, I’m not saying it’s better, but if noise rock is your thang, then you will really dig this piece. The whiplash begins with “Jordan, Minnesota,” a terrifying ditty about a child molestation ring in said community; Albini hollers, “This is Jordan, we do what like… this will stay with you until you die and I will stay with you until you die.” I’m still baffled as to why Disney never returned his phone calls to feature Big Black’s music on one of their film’s soundtracks?! Musically, Roland, the drum machine is hard at work throughout the record, complementing the chainsaw guitars, literally, these motherfuckers sound closer to chainsaws than most wimpy musician’s guitar playing. Other lyrical themes include domestic abuse (“Fists of Love,” “Stinking Drunk,”), the innocent hobbie of watching cattle slaughtered at a local ranch to pass the time (“Cables”), and racism (“Pete, King of the Detectives”), where Albini roars in his deliberately, white liberal hipster, offending lyrics, “I am Pete!… I’m a hard working man, I ain’t no drunkard, I ain’t no coloured man!” Don’t worry kids, it’s all good fun… Moving on, “Kerosene,” is the best track and by far Big Black’s greatest offering, in fact, I’d say it’s Albini’s “Let It Be,” with Shellac’s, his other band, “My Black Ass,” being a potential rival. Kerosene features everything that made Big Black kick ass and harsher than just about any other band one cares to name: musical intensity through violent, slashing, guitars, pounding drum beats, extremely morbid subject matter (some kiddies decide to burn themselves to dust because it’s “something to do”). Other notable treats include, “Heartbeat,” a catchy cover of the Wire number of the same name and “My Disco,” a tune that puts a whole spin (ha!) on said genre. Overall, this record is for the Ready Men, not for you wee, little pussy wussies out there, I insist y’all find some kerosene.

Comments: Steve Albini is Killing Me Slowly with His Songs! At Action Park delivers a full blast of audio assault and yet it’s so soothing to my ears. Albini and crew whip you with their guitars, so brutal you are wetting yourself in Kim Gordan’s panties. But, it aint rape man ahaha, it’s a fucking fix! Most artists I adore are very pop like in nature. With Albini, it’s a whole other kitten to tackle. The Albini “sound” is heavily guitar driven, mean fucking guitars complemented by pounding drums (“Crow” is a great example of this). The record opens with the beloved, fan favorite, “My Black Ass,” an immensely catchy number and one of the best guitar riffs in all of Rock music. There’s a spectacular groove that just rolls through your headphones and slides down your skin; it feels better than sex… ok, I have no authority to say that :( but, it will one day feel better than sex :). This groove thang is commonplace throughout AAP, but is best exemplified in the closing track, “Il Porno Star,” which highlights one of Albini’s greatest talents: Dark, strangely humorous, and often malevolent lyrics. Albini shouts, “Porno Star Arrives… No English… No Money.” Go Figure. Overall, I highly recommend this classic to all Albini fanatics and newbies as well. If you don’t like it, you can kiss MY (BLACK) ASS!

I’m in an AlbiniBigBlackShellacNoiseRockCockSuckingPhase Right Now. Minus the cock sucking lol, hence all these vids and Melting Mondays. Enjoy!