1. Fat Creeps – Fat Creeps EP – This is by far my favorite EP of this year. It is crazy good. Every song is special in its own way and, on that note, it is tough to compare Fat Creeps to other bands. The music is downright catchy first and foremost. “Leave Her Alone” is the capstone with its top-notch harmonies and surfy guitar solo, but there’s really something to love about all of ’em, such as the endings to “700 Parts” and “Horoscope,” the punch of “Cherry,” and Mariam and Gracie’s vocal showcase in “Secrets” and “Fooled”. Fat Creeps played several shows in 2012 and they’ve been garnering notice locally, nationally, and internationally. It is easy to see why with this talented trio. We saw them about a dozen times this year and were bummed out about the shows we couldn’t make. Yeah, they’re that great!

2. The Maine Coons – The Maine Coons 7″ – The Maine Coons – the hidden gem of underground garage/punk – released their s/t debut a couple years back. That was a favorite, landing on our year end lists. Two years later there is this 7″. All songs on this 7″ are on that LP. Coincidentally or not, they are top tier with reference to the album. I remember getting this in the mail and playing it several times in a row. For days. It’s a masterpiece recalling the King Khan & BBQ Show, if that dude Leo Chips had been on keyboard since the beginning. I’m not sure I’ve heard a 7″ that gets the job like this one does in a long time. “Uniform Choice” is the most outstanding, in my opinion, but as I’ve made clear…you can’t go wrong with any of ’em.

3. The Fagettes – If I See Him Again 7″ – Fagettes are a band that I had heard of prior to listening to this 7″…at least the name. How could one forget? Anyway, this is a delightful release. Singers Ryan and Melanie trade words, with a keen sense of good ole rock and roll charm. The three songs from this release are recorded damn well, capturing all that fun. I especially dig “My Girl Looks Like Johnny Thunders,” with the organ and other great instrumentation. No wonder why they’ve made a name for themselves around here. Can’t wait for more!

Track-List:
Side A – You Live In A Park; Hey Mongo; Dont Give Em Enoug Rope
Side B – Ham Fisted Love, So Second Rate

Comments: Gremlins UK is the band in question from Austin, Texas. Featuring Boston expat and Maine Coons mastermind Spent on guitar/vox, Gremlins UK bare close resemblance to the Coons (naturally) so it seems almost like an automatic love at first listen situation for me. This EP is grittier punk rock when stacked right next to the Coons, but Spent and his band-mates are perpetually cognizant of the importance of hooks. “You Live In A Park” ends before it starts, but it’s a blast from needle-drop. “Hey Mongo” is a punchy tune. The chorus in “Don’t Give Em Enoug Rope” is supreme and the fall-apart-at-any-time-but-pick-back-up-again nature of the track in general is something I totally admire. Side B is equally fun. Spent’s vocals carry these tunes (see “So Second Rate”) like Jay Reatard’s did and like how Nobunny and King Khan’s do…the dude knows what’s up. I haven’t heard very many 7″ this year, but damn this is essential. 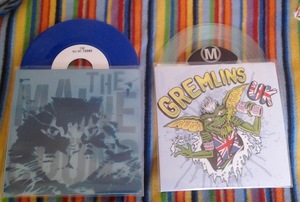 Maine Coons, one of KLYAM’s beloved bands and one of the finest punk slimers in existence, is releasing a 7″ on Stencil Trash Records! Pick it up here with the new Gremlins UK 7″ EP: http://spentplanet.bigcartel.com/product/maine-coons-lathe-cut-gremlins-uk-7