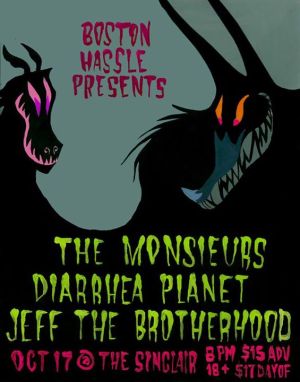 I knew from off the bat that this show was gonna be wicked. Megashredders JEFF the Brotherhood and Megarippers Diarrhea Planet. Opening were the local power trio The Monsieurs. Their brand of trashy lofi garage punk excited the crowd. Their singer, Andy MacBain had quite the swag as well. They just put out a new album and for sure it will win them a Grammy in 2015. They have a lot more shows around the area so czech them out!

Next up was the band that I will affectionately refer to as the Shittiest Band In America. Yes that’s right it is Diarrhea Planet! This was my first time seeing them which I am kind of surprised because they have come around quite a few times. They have 4 different guitarists riffing it at once. This also makes them super loud. Their stage moves rival Andy MacBain’s for best of the night. During one song their had their friend, photographer Pooneh Ghana play with them on stage and they showed her all the moves. They ended their set by taking us all back to the summer of 1997 by covering Third Eye Blind’s Semi Charmed Life. I must say they totally killed it with their violent diarrhea.

JEFF the Brotherhood aren’t their normal selves any more. They are no longer a duo (or at least live they no longer are.) They are a four piece band now and they played the whole show as a four piece. Last time I saw them they played half the show as a duo and the other half as a four piece. I miss the simplicity of them just being a duo. I just felt it worked better for them. They still sounded quite tight though. They did a number of my favorite songs of theirs such as Melting Place, Heavy Krishna & U Got the Look. They even threw in a few covers of Beck’s Totally Confused (which appears on their new covers ep Digs the Classics) and Rush’s Working Man (which does not) As always JTB get a great crowd in Boston. For their last song, the aforementioned Rush cover they brought out The Wizard. The Wizard sang as JEFF played. For some reason I knew it was going to be a magical night from the beginning and this just topped it off. Afterwards I shot the shit with a few members of Diarrhea Planet and they told me how they recently got high with Rikky from White Fang/The Memories 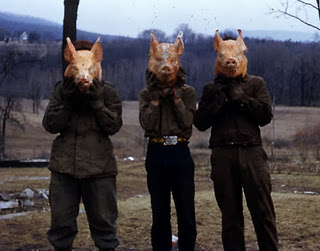 Perpetually scary (but more than equally enticing) SKIMASK have some shows lined up. Boston area KLYAMers: check them out if you haven’t done so. 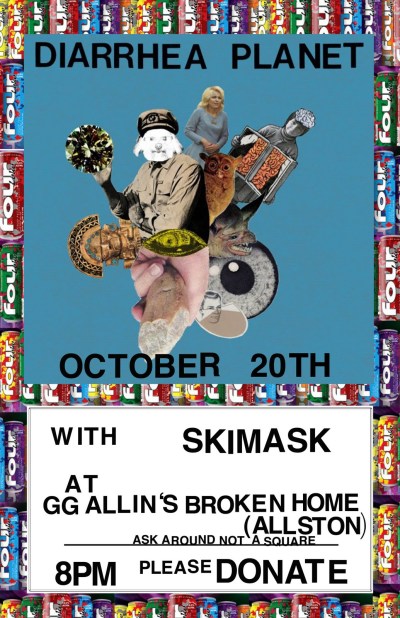 Donations I hear include an OG 4 Loko