So the day after Thanksgiving, some friends and I are taking a little trip to see Brandon Flowers at the House Of Blues. As a giant Killers fan, I am expecting an amazing show. The Killers are amazing in a giant venue, I can only imagine what its like in a more intimate venue like the House Of Blues. I’m expecting Brandon to play most of, if not all of the songs, off Flamingo. I also hope he plays some Killers stuff. I am insanely excited to see one of my favorite performers going today and will probably not sleep tomorrow night. A full review will follow the show after I recover from my (hopefully) blown mind. 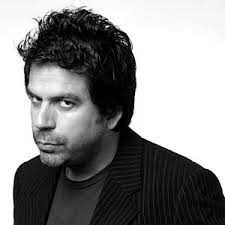 Comedian Greg Giraldo has died at age 44. He died of an accidental prescription overdoes. It was not a suicide attempt. Giraldo died in the hospital in New brunswick, New Jersey. Giraldo made many appearances on roasts, where he was known for being particularly brutal. He was also a host on “Last Comic Standing.”

Myself being a stand up connoisseur, Giraldo had an expert delivery and wit. He was smart and insightful. However, when he wanted toy and was allowed, he would be the bluest man in the room. This is a great loss to the world of stand-up. Since I know he would’ve wanted to leave us laughing below is a clip from his stand up. RIP Greg Giraldo.

Radiohead has released a live “dvd” of a concert in Prague as taken from the view point of fans’ cell phones. The footage was taken and compiled into a movie. The film is for download is multiple formats completely free of charge. Thanks Radiohead!! 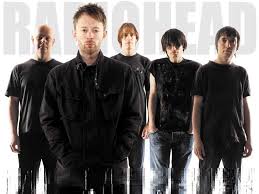 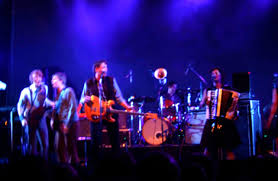 I had the EXTREME pleasure of seeing Arcade Fire live last night. And I was blown away. Everything about it completely had me reeling from beginning to end. Opening act Young Galaxy were probably the best opening act I’ve seen. Sounding like a mixture of MUSE and Arcade Fire, they played songs off their recent release Invisible Republic. About 30 minutes later, the Arcade Fire took to the stage to the roar of the sold out pavilion. Opening with The Suburbs’ Ready To Start the entire place was mesmerized by the band. My only complaint is that the band played too many tracks off The Suburbs when not many people knew the songs. However, the songs everyone knew (No Cars Go, Intervention, Neighborhood 1-3, Rebellion (Lies) etc.) everyone sang their hearts out. Overall, a phenomenal show which I would see again in a heartbeat.

The Long Haul is an album by electro-acoustic band eating alone. The band is made of only multi-instrumentalist Matt Cameron. Matt Cameron blew me away with his debut album, The Long Haul. The album deals with the subject of Cameron’s estranged father and the various feeling, thoughts and emotions he went through dealing with it. The sound of the album is very dreamy and very atmospheric with acoustic guitar throughout. The lyrics pull on your heartstrings, as they are blunt and to the point on some songs and poetic on others. The production is great seeing as the record was completely produced solely by Matt Cameron. Overlapping vocal tracks and glass crashing are really cool tricks used on the songs. Overall, I highly recommend this album.

P.S Look at the names of the songs in order. Kinda cool, eh?

When I Was A Kid– B+. Indian-sitar feel to this.

You Were Never Around- B

I Though If I Had Been Better- A. Heartbreaking.

You Wouldn’t HAve Given Me Up- A-

Whoever You Are- A. Great little song.

Over The Years I’ve Wondered Where You’ve Been- A-. Nihilistic.

And Tonight, In This Hotel Room- B+/A-

I Sent This In A Letter- B

But It Got To You Too Late- B+

And Came Back Crumpled, Saying- A. My favorite track on the album.

Person Unknown, Return To Sender- A- 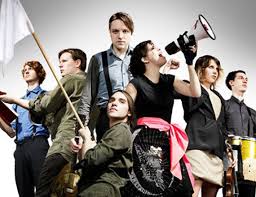 I am lucky enough to have tickets to the sold out Arcade Fire show at the Bank Of America Pavilion this Sunday. With their new album The Suburbs getting generally pretty positive reviews, here are some of my expectations.

Expectations: I expect, first of all, to have a soar throat the next day. I will be belting every song (except the ones off The Suburbs that I haven’t heard yet.) Next, I expect a lot of people there to be there just because of Wake Up. There will still be die hard Arcade Fire fans, like myself, there just there will be a bunch of people who got turned onto them because of Where The Wild Things Are. Finally, I generally expect a mind blowing-ly good show. Arcade Fire is one of the best live rock acts going today and I want them to live up to their reputation. I’ll see if the Canadian Septet can blow me away.

If the album cover hasn’t given it away, Scissor Sisters are very sexual. On their third outing, American glam dance pop band Scissor Sisters explore the 70s and 80s pre-AIDS gay scene, it’s fun and it’s excesses. I will say this now, if you don’t like house music, dance music or Lady Gaga, you probably won’t like this. For me, this is an indulgence that I take from time to time. I listened to this a few times and I find new subtle nuances in every song. Producer Stuart Price does a great job making this really danceable and yet somehow you can still just sit and listen to it. The songwriting doesn’t really differ in subject matter granted every song is either about sex or partying. However, songwriter Jake Shears writes about sex and partying using endless innuendo to make it “radio friendly” even though Scissor Sisters have gotten little to no radio play in the U.S. A great buy that will give you tons of fun.

Overall Grade: B+/A-. Fun record, some of the best production I’ve heard in a while.

Radiohead frontman Thom Yorke has said in a rare interview that young musicians shouldn’t latch onto the mainstream music industry, saying it will fold onto itself in a matter of months. He says band should release music themselves and not look to get a major record deal. Radiohead set an example of this with the release on 2007’s In Rainbows album, which had a “pay-what-you-want” method of purchase. Since then, thousands of bands and even movies have done this. What do you think of Thom’s prediction? Is it really a matter of months before teenagers will have to work a little bit harder to get the latest Lil’ Wayne track?

Third Man Records announced the name of the new Dead Weather record, the release date and when a music video would premiere on iTunes. The new record will be called “Sea Of Cowards,” and is scheduled to be released on May 11th. The music video for the song “Die By The Drop” will make its debut on iTunes on April 6th.

Here is the video that announced all this:

Jack White, drummer/singer for blues-rock band The Dead Weather, has stated that the band is recording the last few songs on their second record and that he will begin mixing the record within the next week or so and that to expect the album in April. White has stated that the first single off the record will be called “Blue Blood Blues.” He has described the somewhat new sound as “bluesier and heavier than we ever thought we could be.” The Dead Weather consists of Jack White(drums), Dean Fertita(guitar), Jack Lawrence(bass) and Alison Mosshart(vocals). I don’t know about you but as a full blown worshipper and believer in the Church of Jack, I am really pumped for this record.