Comments: Heading far away from Beantown to see show isn’t a frequent occurrence for us at KLYAM, but when we do, it always ends up being a fun time. When I first saw in June that Ty and Thee Oh Sees were playing in Brooklyn, but not in Boston (or Portland or Providence), it was a no-brainer to make the voyage. Not to mention that Nobunny shortly thereafter announced a date in Brooklyn for the night before. So yeah, what a nice weekend.

Act I – K-Holes – By the time the K-Holes hit the stage, The Well had filled right up. I could tell the crowd didn’t want to miss any of the action, and why would they? K-Holes are what I call mainstays as openers for some of the rock ‘n roll underground’s bigger bands. I’ve seen them open for Black Lips twice in New York and once for King Khan and the Shrines in Boston. They’ve certainly built up a reputation as a band that brings all they’ve got to the stage. On this night, the stage is quite large for them (“I feel like I’m at the Emmys” singer/guitarist Jack Hines informs us), but this of course doesn’t change their performance. They plow right through several dark, saxophone crazed songs, which to me sound even better than in the past. Also, I’ve never seen a band with their set-up (saxophone, vocalist/tambourine, guitar, bass, a drum kit with three floor toms). They are interesting. I enjoyed closer “Rats,” off their most recent LP Dismania [Hardly Art], the most. It’s a full steam ahead ass-kicker, fitting in perfectly with what’s to come. 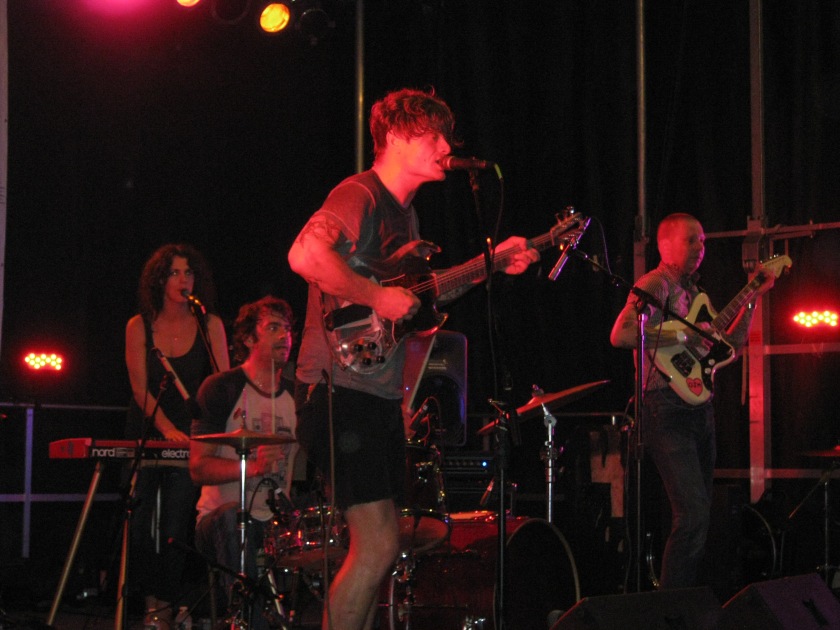 Act II – Thee Oh Sees – Finally! It took me three years (approximately) to see these guys and finally I can say it…I saw them. Seeing a lot of live footage on YouTube and hearing people rave incessantly about the live shows – not to mention my very many listens to the records – all of this is awesome, but you’ve got to be there. So I was there along with about a thousand others and we witnessed the same thing. A band that truly has it together and quite easily engages the audience’s attention to something that makes blue shirted security guards want to join in on the fun. Thee Oh Sees got it started with “The Dream,” which is an insane tune, but there’s so much more build-up in the live setting that it is really hard to describe to be honest. After that we were blessed with “Lupine Dominus,” a stand-out off just released Putrifiers II. Then came that song that sounds like “Have Love Will Travel” — oh yes — “Tidal Wave,” which is just as cool as it sounds. They also got in “Carrion Crawler/The Dream,” the wild and quintessential sing-along “I Was Denied,” the superbly lengthy a-a-a-a-a-ah-ah-ha-ha-ha-a-a-a-a of “Contraption/Soul Desert,” and some others which I can’t quite remember right now. Either way, this was one performance that I will surely remember and I can not wait to see them again. It would be cool to catch them in a littler place, but they are at the point where they’ve got a pretty sizable and energetic fan base so I’m not sure what’s to come. No one does.

Act III – Ty Segall – Ty (and band) – if you read this site, you know there is a whole bunch o’ coverage, so disregard the obvious – are near the top of the charts as far as the kind of music I really love. It’s not even one sound – it’s more of the experience and variety of selections that gets me pumped. Whether it is the cuts from Slaughterhouse that they opened with, a throwback classic like “Standing at the Station,” or the many Melted jams “Imaginary Person,” “Finger,” “My Sunshine,” “Caesar,” “Girlfriend,” the current Ty set is all over the place categorically, but it’s all marked by an unbeatable combination of loudness, fuzz, and pop. It is no wonder why more and more people are being turned onto Ty and his band. And they’ll continue to be. The heavy rains that came during “Finger” seemed to coincide with the intensity of the song and they never really stopped. I was pleasantly surprised by “My Head Explodes,” my favorite from Goodbye Bread, which the band hasn’t really played too often. You could say more surprises came with a little “Sweet Home Alabama” and an encore of The Doors “The End”. It should be said that the first couple of rows represented a danger zone for crowd surfers. There was one fan who took a particularly gruesome fall near the stage that drew the concern of Ty, who requested medical attention for the man. We all hope he is okay. Ty shows shouldn’t be dangerous and apart from that incident, everything went pretty smoothly. There were also several photographers and a cameraman on hand – and they were having just as great of a time as the crowd. It was a cool sight!  Back to the songs. Closer “Wave Goodbye” and oldie “Skin” bear mentioning along with the finale of all finales, “The Drag”. Hope to see these guys soon in Boston, but you know, if New York is the only option, New York is the only option. That’s easy.