OK folks it was now time for round 2 of the Burger Records Caravan of Stars. The first round happened last year when The Growlers, Gap Dream, Pangea and a few other megastars did the tour. Tonight Pangea were returning this time as HEADLINERS! Pangea have finally hit the big time. They have toured the world. They have a record deal with a label which may or may not be major. Ok enough about them now. We’ll get to them later.

Starting the show were Puerto Rican punx AJ Davila y Terror Amor. I was sorta familiar with their stuff because I knew of AJ Davila from his other band Davila 666 who I saw a few years ago. They brought the energy. Too bad there wasn’t a bigger crowd to see them. I’d say that Mozes and The Firstborn were probably the most psych band of the night. I saw them back in February opening for, you guessed it, Pangea and they were really good then. They were fine now as well. There were times however that I couldn’t hear the vocal as well as I hoped but I never blame the band for that. Now it was time for Cherry Glazerr to make their Boston debut. I had been looking forward to seeing them for a while now. They were the first band to bring a real crowd. Their songs are lofi fuzz-pop about things such as cats, grilled cheese and other sweet topics.

The Coathangers were now up to rip shit up. Playing mostly tracks from their 2 most recent releases they banged hard through their set. There were times when band members switched instruments and everyone got in on the singing and shouting. After their set I was chatting with some of the members. I found out that one of the girls in The Coathangers was the sister of one of the members of The Hiss who were one of the more underrated garage punk bands of the 2000’s. Pangea played all their hits to finish the show. They played what I would expect to hear from them including Badillac, Sick Shit, Offer, Too Drunk to Cum and River. At the end I bought another Burger button and I can officially say that I am a Burger Bitch!

Pre-Show: The pre-show was lengthy due to the late arrival of scheduled headliners The Coathangers and openers Casanovas In Heat. Ultimately it was decided that Casanovas would play last instead of first. It’s too bad we couldn’t stay to see Casanovas (unfortunately). Sometime soon. 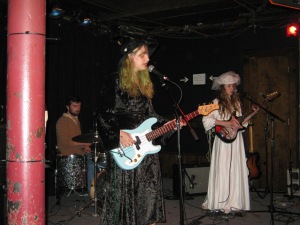 Fat Creeps: Fat Creeps are quickly becoming a local favorite and actually they’d be right up there in the rankings even if they weren’t from around this way. There’s a lot to like about Fat Creeps: the aesthetic (on this night it was multi-instrumentalist Mariam Saleh dressed in black raiment [first use of that word since 11th grade English] and multi-instrumentalist Gracie Jackson wearing all white. Thematically speaking, I’ve seen/heard Plymouth Plantation and Titantic tossed around from spectators. Either way, it was an interesting sight. Let’s not leave out drummer Jim Leonard. He was in casual attire. They got the show rolling with “Secrets,” a relatively new track that exemplifies the vocal harmony that you might have read about in the Metro. I really dig how they play so casually..just let the music do the talking. I realized very quickly that what I was witnessing was something special and actually was way more satisfying than Best Coast or Vivian Girls. There’s this charm of outward simplicity under the guise of inner complexity. Know what I mean? The rest of the set featured all of the hits, namely “Leave Her Alone” — great solo and bass line, “700 Parts” — the ending “ooo-ooo–aahh-aahh” is superb,” and closer “Horoscope,” which I think Calvin Johnson would enjoy immensely. I’m not sure what Fat Creeps plans are, but I see they are already developing a strong local fan base. Pretty soon they’ll be headlining Great Scott like the Vivs have. I predict. They should.

SKIMASK:”This is one of the strangest and most entertaining bands I’ve ever seen live.” And YouTube commenter hits the nail on the head! If you haven’t seen SKIMASK, you probably haven’t seen anything like SKIMASK. Fronted by the great social commentator and Swiz Beatnik poet Prof$t Mohamed, SKIMASK is in the red with energy and explosiveness. They activate the inner primal side in people according to one devotee. And it rings true. The crowd doesn’t really know what is going on, yet the pit remains quite active and not one person seems bored. Vocals, drums, and vocal effects. Spontaneous antics by the Prof$t, including but not limited to jumping around [to an elementary phys ed teacher’s delight] and sitting down in front of the crowd. What tickles my fancy the most of all is this song: (http://www.youtube.com/watch?v=pIaaEmO3hPc&feature=related). SKIMASK — kept alive by the spirit of Cory on drums and Dominic on effects/vocal — were about to conclude with that. But keep playing insisted members of The Coathangers. And they did. And it was wonderful. They are outer-worldly you could say, but it’s them just spinning the rock and roll wheel their own way. Folks in New York and New Jersey, brace yourselves, as the skimask is coming to get u back opening for JEFF The Brotherhood soon. Boston area locals: brace yourselves as well.

The Coathangers: The Coathangers from Atlanta, Georgia! None other. Faced with the burden of no sound check, ahh who needs that?, they blitzkrieged right into their set. And they came hard and displayed no regard for the typical. No need for the typical on a night like tonight. I’m basically talking about their switching of instruments and the infectious bursts of punk rock that came a plenty. The front-woman was a revolving cast of ‘hangers and each brought their own variety to the table. The crowd was loving it and you could tell the band was having just as much fun. Now now now. Here it comes. I’m not extremely knowledgable in the arena of Coathangers material BUT I’ve got their set below. So this means that I will be. I can’t quite describe their set in terms of individual songs; I think I gave a decent gist of the experience. That’s what counts?

Opening for Girl In A Coma on Sunday November 13!