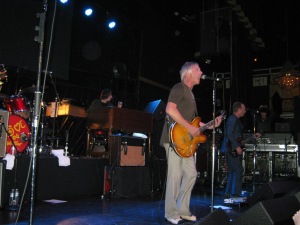 I’ve seen shows at the Royale with a decent degree of irregularity since the posh club opened its doors in 2010. No complaints as far as the performances were concerned; King Khan and the Shrines, Deerhunter, The Walkmen – all bigger names that have pleased me nicely over the years. Seeing Paul Weller fits right in there, especially in a standing room only setting like this one.

Kicking off the night was Matthew Ryan – one man with an acoustic guitar. He said it’s not easy being one man with a guitar opening for a legend such as Paul Weller. I agree. I’m not sure many solo performers of Ryan’s variety could do an adequate job of entertaining me in this kind of setting. He did seem to garner some interest, but there were just as many people chitchatting among themselves and ignoring the performance as there were genuinely curious onlookers. His set didn’t do anything for me, but I didn’t expect it to.

Paul Weller – I’m no expert on him, but seeing him a couple of times before this, and listening to his solo albums since I was very young, I’ve grown very appreciative of what he’s done. This was definitely the most fun I’ve had at a Paul Weller show. I would say that this might just be how other attendees feel as well. It may have been years since some of these people have gotten the chance to see Paul up close and personal. Having him and his band (made up of another guitarist, a bassist, an organist, and two drummers) wail away just feet in front of me is something I won’t forget. From this mini-tour’s itinerary, it seems like Paul made it a point to play at smaller sized venues, at least in comparison to the gigantic structures he regularly plays in his native country. As far as what the audience was treated to… about twenty songs from his old Jam days up through his latest Sonic Kicks LP. I was familiar with most of Paul’s set (shout out to setlist.fm for preparation), but the Stanley Road back-to-back of “Whirlpools End” and “The Changingman” is my favorite. Eight hundred 50-somethings chugging $13 mixed drinks may agree with me there. Paul came back for an encore and finished things off with customary Jam hit “Town Called Malice.” We were all pulling for a second encore, but hey that’s alright, we enjoyed a very memorable hour of music.

Modfather will be releasing Sonik Kicks, his eleventh solo studio album, in March 2012 on Island/Yep Roc!

Watch the video for the track “Around The Lake” — HERE

I was shuffling through some boxes of old books and I found two lists I made in what I can only imagine is roughly the Summer of 2007. Here they are:

101 Favorite Songs (except there is only 41 listed)

If I made similar lists today they would be dramatically different than seventeen year old Chris’s lists. But, at the same time with the exception of maybe one or two artists all enumerated here can be found on my ipod and I still enjoy listening to them very much. 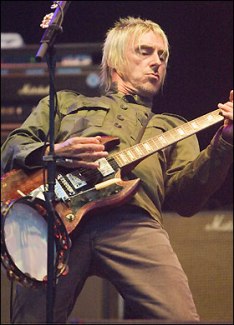 Paul Weller is at it again. Songwriting that is! He’s been writing loads of great material for more than a quarter of a century and it doesn’t look like the man’s creative juices are drying up any time soon. He’s aiming for an autumn 2011 release for the new LP, which will have 11 songs. A grand ole jaunt around the world is expected in 2012.