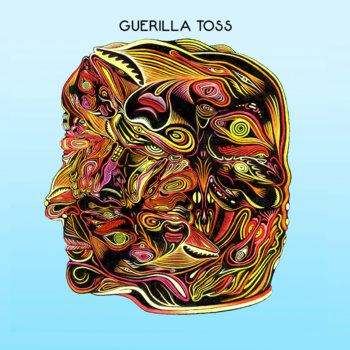 Boston flunk revolutionaries Guerilla Toss have been doing it up solidly for years now, playing near legendary basement shows around the Commonwealth and to further stretches of the centuries old United States. But like the hard workers should be, they have gotten a much deserved boost in status from the larger legions. But like a timeless experimental band, they’re still operating on their own bases and look it we have this Smack The Brick.

Smack The Brick G-Tosses new 4 songer on NNA Tapes is them right now, their new configuration I take it, and it is really something of a listen. As unexpected yet so Guerilla Toss, describing them always escape me. I can usually hear something of references in music, but with this group I really can’t and that is such an sickkk revelation. If I knew what I was doing I’d want to be Guerilla Toss. The creativity of the instruments, the changes in literally how a song sounds, it’s like ya dude you don’t even need to be crazy to listen to this. It’s like you tap the lady next to you’s shoulder, hey Guerilla Toss, hey Madonna, hey Kylie Minogue, hey Eddie Current Supression Ring. No one blinks any eyes or anything. It’s noisy rock ‘n roll and so many other things. The bass and the drum are what you can count on to some degree if you are down for a traditional following-along. If you really wanna get wacky though and I recommend this, it’s keeping up (no actually, actively following along!) with the guitar and Kassie’s vocals. The result is that Which You Can See in the dance movements of the crowd at a G Toss show.

It doesn’t make sense and should it. It makes complete sense. It is the most liberating of today’s music and you didn’t even realize that. “Be the Breeder” takes me back to the year 1997 or 1998 a time when I listened to the latest in hip-hop and R&B. This is that no no I’m not nuts! It’s like they’re pressing knobs, man, hey those are people here, live people, performing music. Smack The Brick is not all that, there are some no confusing moments just groovy, catchy, funky, punky, jabby, spacey times, you got it. Often all at once. With so many satisfying side projects like Jane La Fonda and MEDS (more on this very soon!!!!!), I’d say Kassie dominates the mic like no one else around here. It’s hardly arguable. Listen up