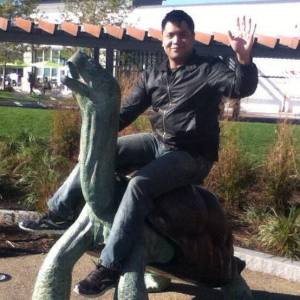 So yeah, as you can probably tell by the date above, this is EXTREMELY LATE.  However, as you may or  may not know, it’s okay, we here at KLYAM try to write about every single show we attend. Lately, we have been sucking at this! Too many shows, too much booze, too much school, too much work, and then not enough booze. Alas, I won’t waste anymore of your time droning on about our woes. Just dance to the music, and for a good cause might I add. This show here was a party to raise money for those suffering and starving in the Philippines. So bear with me (no pun intended) while I begin a series of dust blowing mini reviews and here we go…

Só Sol – Só Sol. So sick is more like it. They kill it. They kill it dead. Which, I haven’t decided how I feel about that phrase. It seems redundant. If you kill it, can’t we assume that it is already dead? But, in this instance,  the usage simply feels right. That extra confirmation that Só Sol in fact killed “it” and that “it” is in fact dead. What is it? It is any hint of monotony, tranquility, or apathy. On a freezing November night, this Latin, folk based trio permeate sweaty, sexy, sultry vibes and dance throughout the crowded, yet still comfy basement space.  I’ve seen these cats once before at  P.A.’s Lounge, but this place is a lot cooler. Then again, most places hosting music is superior to P.A.’s Lounge. Either way, catch these people anywhere you can, including PA’s. http://sosol.bandcamp.com/

Yankee Power – Ahh Yom Kipour, the holiest. I mean Yankee Power, so holy. Radically different from Só Sol, but just as sexy. This is a change of pace for these yankees. I am more accustomed to seeing these gentlemen in above-ground settings such as Middle East, Rosebud, and Precinct.  It’s certainly a different experience and an enjoyable one at that. They rock just as hard, but this time around I am not actually looking up to them on a stage or anything. There’s less breathing room. Bassist/vocalist Mark Fallon can attest to that as vocalist/guitarist Jeff Gallagher shreds on his guitar and shakes his booty in classic Jeff fashion, slowly planting himself on top of an uneasy Mark, with nowhere to go. They’re a fun bunch and my favorite song from this evening is “Because It’s Hard,” a Mark tune that always reminds me of Thanksgiving dinner at my house, which is a mere fours days away. Also, on this very night I bought myself a copy of the group’s bodacious rock beast: Zoo Traffic. And I got it on vinyl ooh la la, aren’t you jealous? Well, you can be just as cool as me starting today, starting right now: http://www.theyankeepower.com/

Jason Zavala – I was promised that Jay Z was playing this shindig and I won’t leave until Jay Z plays! I actually don’t even like Jay Z, but if I did then maybe I would belligerently shout this. Maybe. Jason Zavala, on the other hand, is a one man folk machine unleashing songs with his powerful, impassioned vocals. He truly is naturally gifted, which I can’t always say is true about most performers I see up to and including many of my own personal favorites. That aside, this sort of stuff isn’t exactly my thing, it’s too conventional and mainstream for my tastes. Some, if not all, of the songs are political in nature, but frankly half way through the set I find myself more enamored with the socialist, quasi lecture/rant my fellow Wakefieldian Chris Morrill is delivering elsewhere in the house. Still, here’s a shout out to Jason: http://jasonzavala.bandcamp.com/

Alex Marantz – This fucking guy, this fucking guy here. Haha, I don’t know why I just wrote that. It just felt like a “this fucking guy” moment. Often, you’re cocked and twisted and you point at some motherfucker from across the room and you say “this fucking guy.”  It’s a swine’s way of saying “hi, this is Alex. Alex, so and so. So and so, Alex.” Alex is a prolific singer-songwriter dude, a professed “lover of tape recordings and lo-fi bliss,” a fume hood, and a future day. That is to say he is a member of the bands Future Days and Fume Hood, both of which I have seen live. But, this is a solo effort and it’s a bit poppier than his work in those outfits. The set is relatively calm, soft, and dream like. Spacey – musically and lyrically. It’s accessible and not particularly controversial in any way. You could take your mother to see him, if she was hip. Yep, Alex does his thing and does it well, he’s still no Jeremy Piven though. http://alexmarantz1.bandcamp.com/

Ben Tan – Last and if you think least then I’ll knock you right square in the nads TWICE… BEN TAN!!!! Ben Tan, one of my best buddies and a talented multi-instrumentalist closes the show. One man pop guru. He cranks out BBT (Big Ben Tan) classics such as “Marielle,” “Upper Lower Middle Class Blues,” among others. Sadly, most at the party are not present for most of Ben’s performance and there is only a few of us remaining. This has nothing to do with Ben’s music itself, but rather the fact that by the time he goes on it’s  nearing 3 AM. The set skids its way into a peculiar jam session and better yet an impromptu Revivalists reunion. The Revivalists were a high school band in my hometown (Wakefield) featuring Chris Morril, Liz Sullivan, Brian Hickey, and of course Mr. Ben Tan. Check out Ben’s solo work here: http://bentan.bandcamp.com/album/inside-out