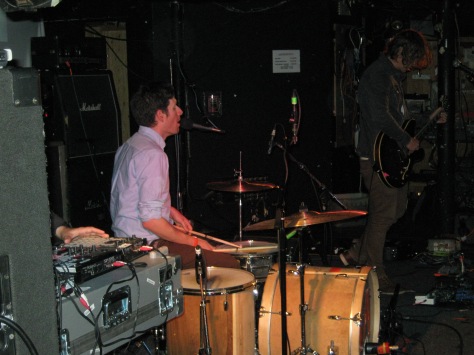 Act One – Needy Visions – Now, I really liked Needy Visions. The lead singer and guitarist was very Boston. He and his crew were very passionate. I always like that. “Fuck the System” showcased the best of these guys. A jovial keyboard riff contrasted the passionate vocals. Props to the bass player who really brought the funk. Props to the drummer and the other guitarist as well as they also contributed to the sound and overall “funk” of the band. They aren’t really your typical garage rock or punk band by any stretch of the imagination. They are more rooted in fun beats and tight rhythms. It’s cool.

Chris: Glen summed up most of my points, but he perhaps loved them more than I did. They were entertaining though and I recommend y’all check em’ out. They are playing at the Whitehaus this Friday (November 19).

Act Two – Lucky Dragons – I’ve seen a few groups that possess a very similar style to Lucky Dragons. For those who aren’t familiar with Lucky Dragons, it was one guy — Luke Fischbeck — with a laptop and a few other toys. He played some ambient music that was at least partially based on crowd interaction. He handed about ten CDs to people at the front of the stage. There was a projector and a box on the stage. At first, I didn’t quite get the concept of the CDs, but I quickly realized that when somebody flashes the CD on top of the box and in front of the projector, a unique sound is produced on the PA. This was fun for about three minutes. In the background of the stage there was a pretty constant slow motion projection video of what looked like mansions. At some point, Luke handed some of us pieces of paper with lyrics. He repeated about half of what was on the sheet. About ten minutes later his set was over. I always feel bad for people that do experimental sets like this. Since the music is pretty constant, a lot of people were bandying about for the duration of the set. They treated this art form as background music. I can’t really blame the talkers since this experience is rather obscure and awkward for first-timers and those otherwise unfamiliar with such art.

Chris:: Yeah, this aint my bag, but like Glen said at least we were not simply spectators and instead had a chance to participate in the process.

Act Three – No Age – Wow, where to begin?! No Age, simply stated, has been amongst my favorite bands — live and on record — for the past couple of years. Their all-ages show at the Middle East Downstairs in July 2008 marked my first real concert experience. It’s funny because I only stumbled upon No Age by accident. I was looking on the Middle East website to see if The Walkmen were playing. They weren’t — yet — but I noticed something else: pretty much every show listed was 18+, except this one band No Age was playing an all-ages show. “Wow, this is awesome” I thought. So I checked them out on YouTube and really liked what I heard. The rest is history. Flash forward nearly two and a half years later. I’ve seen them four times and each of their shows has topped their previous performance. Incredible. Three full-length albums and one EP deep, No Age had a lot more material to showcase than they did on that hot July 2008 night. They started this night off with “Life Prowler” off of their latest LP Everything In Between. Following that they rushed into a familiar classic “Teen Creeps” from 2008’s Nouns. From the opening notes of this, the crowd erupted into a frenzy. A frenzy that’s never been known to really let up. Smiles were plastered on everyone’s faces. Some people decided to crash into others. Others held onto the stage — or strangers next to them — for dear life. The 21+ crowd in the bar section looked on, with some snapping photographs. Whatever the case, it’s all about the music with No Age. The punk rock spirit and excitement that comes from the drum kit of Dean Spunt and guitar of Randy Randall is unparalleled. After “Teen Creeps,” we got a little taste of everything from the ambient-turned-explosively catchy noise classic “Every Artist Needs a Tragedy” from Weirdo Rippers to the sample heavy power number “You’re a Target” off of their Losing Feeling EP to “Chem Trails” and “Fever Dreaming” — the best of the best off Everything In Between. Meshed additionally in the set were other excellent tracks off Nouns and Everything. One especially great moment was when the sweat from Dean’s drum kit flew into the air as he started pounding his floor tom and snare drum in the opening seconds of “Glitter”.  After the end of their near hour long set, the crowd took a breather (realizing just how much we were sweating) before welcoming the band back on stage. Chris might have been expecting another “Don’t Talk To Me” G.G. Allin cover, but instead they performed Black Flag’s “Six Pack” to a T with the singer of Needy Visions joining them up on stage. They closed the set with Nouns closer “Brain Burner”. What more could we ask for?! Some high fives from Dean and Randy? No need to ask. These fine gentlemen do that kind of thing automatically. This show was about as fun as shows come. It was the kind of show that I’ll always be able to reminisce. Being able to talk to Dean after the show was a pleasure. He took the time to sit on stage and interact with concert-goers after it was all over. This is exemplary. It shows he isn’t some music celebrity, but rather a really nice guy playing really nice music. Hope to see you back again soon, No Age!

Chris: Easily one of the best bands I have seen live, perhaps the Black Lips are the only other band I would say has topped them for me. Dean and Randy are masters of high energy without coming off as typical Rock Stars that try way too hard to get a crowd going. With these dudes, the music simply speaks for itself. They played more than half of my favorites as well as some other killer tunes, plenty of cuts from the new LP. I always dig their references to old school Hardcore and this time around I loved their rendition of Black Flag’s “Six Pack.” Dean went so far as to include the classic closing lines, “What do they know about partying or ANYTHING ELSE?!” Another classic moment was the long, but amazing build up in “Every Artist,” we waited in anticipation for that awesome moment when Randy swinged his guitar around and kicked right into the heavy part of the number and of course the crowd went crazy. Speaking of which, this was one of my favorite mosh pits, as always with No Age. Can’t wait to see them again! Modern day DIY Punk at its finest.