Glad to see our Band of the Week, SARALEE getting some more, well deserved exposure. Here’s a link to Becca Capers’s  GET BENT! review: http://getbent.fm/post/21797586533/review-saralee-demo and here’s a link to the demo itsself: http://saralee.bandcamp.com/album/demo It’s an essential!

P.S.  the review describes them as  “a three piece,” but in my experience they have always been a two piece (Sara and Lee). Correct me if I’m wrong, but I’m pretty sure they are just a two piece. Either way, it’s all good! 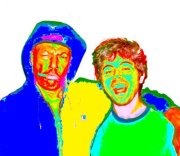 Artists: SARALEE,  Guerrilla Toss, Happy Jawbone Family Band, Rotten Apples, Jacques Le Coque, GG’s House Band, and possibly others
Date: Friday, March 23, 2012
Venue: Gay Gardens aka “Gary’s Garage” (Allston, MA)
Comments: NOTE! Sadly, we were only able to see SARALEE :( which is a damn shame because I really wanted to see everybody, but we KLYAMERS live in the boonies and had to make the train ride home!

SARALEE– Fortunately, SARALEE is the band we came to see, so I am glad they play first. In the past year, I, well the KLYAM in general have started to branch out more into the local Boston scene(s) and SARALEE is definitely one of the best bands we have come across. I see a fair amount of bands, but few measure up to these two. It is funny how their name is so fitting The band is Sara (vocals and guitar) and Lee (drums), but in a lot of ways I almost do not see them as a duo, but rather like one whole entity. I know it sounds crazy, but the chemistry between the two is so solid I cannot think of anyone else filling their places. The music is fairly simple, but very effective. Lee’s drumming is mellow, never gets too in your face, but creates a wonderful aura. I don’t know, it is hard to describe, but seeing them live (this is the third time I have seen them now) I always feel like I am in some sort of haze, and this also may be chemically induced, but drugs aside, their performances are atmospheric and dreamlike. I cannot say enough how much I love Sarah’s vocals, seriously one of my favorites. It is quite unlike anything I have ever heard and that is certainly something I rarely get a chance to say. I can think of comparisons, but I would rather people listen to it themselves first. “Circle of Hands,” is an incredible song and as always they kill it. I feel like this band would be perfect for 1982 Olympia, WA, K Records. I can picture Calvin Johnson hopping around to SARALEE, baking pies and playing Twister. But, it is not 1982, it’s 2012, thirty years later and if I wasn’t broke, I would put out a record with SARALEE, if they were down with it. Some day soon, KLYAM Records will be up and running, keep your eyes open.
Here’s a link to SARALEE’s demo, it will knock you flat on your ass and if it doesn’t, then I will knock you flat on your ass. XOXO!
http://saralee.bandcamp.com/album/demo

Following the band’s performance, Glen and I hung around with the fellow attendees and discussed various topics ranging from music to anarchy. Some folks commented on our seemingly odd memory, particularly how we can remember every little nuance of each show we see. Of course, comparatively, we do not see that many and that explains a bulk of the reasoning behind this “phenomenon,” but I can say for myself, I do put forth an effort to remember anything and everything I can, unless it sucked, naturally. So, Paul, if you are reading this, what’s up dude?! Remember I gave you a bud light and I told you to check this site out, well if you are in fact reading this, good job. And, if you don’t remember me, no worries.  I also abruptly brought up Judge Judy and it was random as fuck  indeed. And Dave from New Hampshire, how’s the face book going? See, I don’t forget. I wasn’t just bullshitting y’all.