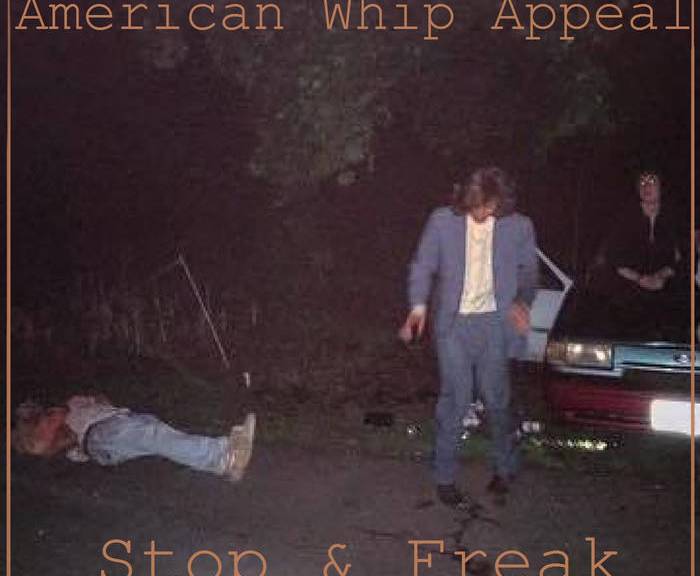 There’s a lot that can be said about this group from Boston. A lot of history. But for most of you folks out there in the world, this might be your first taste of the American Whip Appeal crew. The band is relatively new or old, whatever. All I know is I first saw em play a circa Thanksgiving rip roaring, Nattie Ice drinking, house show set. Gee whiz almost one year ago. That was Dylany, loose and probably more country.

Recordings have emerged. In fact, Stop & Freak is the group’s first full length effort, available right now digitally through Bandcamp. It’s been over a month and dare I might suggest I accumulate multiple daily listens? I will. I am a full on, out in the open, appreciator of these cool, boppin tunes. Listening I get this feeling of camaraderie among the group and an intimacy (not sure if they are the same thing). This is what it is like for me to listen to my favorite groups. From the performance – just last week opening a show at Deep Thoughts – to the ragged sound of the recordings, this is “what’s up”.

I was almost going to name this article, respectfully, Anti Country. American Whip Appeal and I hadn’t one drink in my system that night. I’m not talking out of my ass here. James Coarse (vocals/guitar), Hannah Barbarian (bass), and Buck Palace (drums/guitar) are doing their own realest rock, bizarre in content and presentation, and groovy and fun. That’s where the anti-comes in; Coarse is ,probably unknowingly, flashing some Adam Green showmanship and comedy. He’s been in the game probably just as long – approximately since the infant years. But at the same time THIS IS SOME SERIOUS STUFF. BUT IT’S NOT. Ah I don’t care, I like singing along and not knowing what I’m saying because that experience, or hyperbolic version of a semblance of some actual-ish events. Story telling and totally pleasant, awesome, etc – musical accompaniment from all directions. This is what I want out of it all. Thanks American Whip Appeal.

And that brings up a good point – we put together a show that is happening real soon in fact – THIS UPCOMING MONDAY AUGUST 21 at ZuZu in Cambridge. 10 PM. featuring American Whip Appeal, The Maje, a gentleman whose music I have positively diatribed in a similar fashion as above for a half decade or so – his band Love Strangers, and of course, the royalty of noise pop immediacy, Earthquake Party. Great starting point for all!