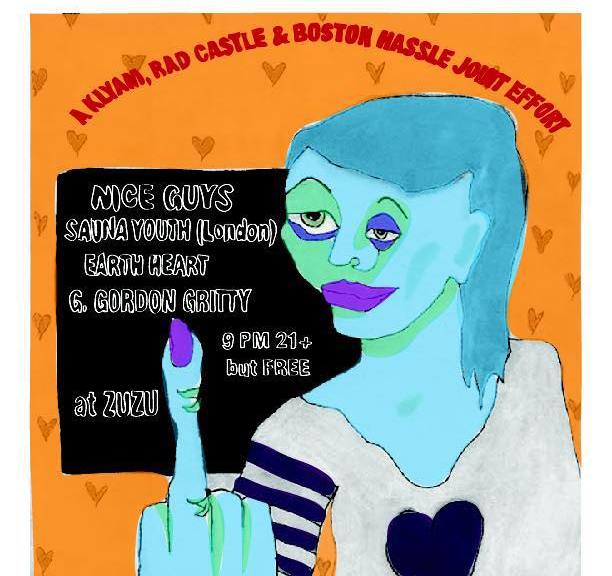 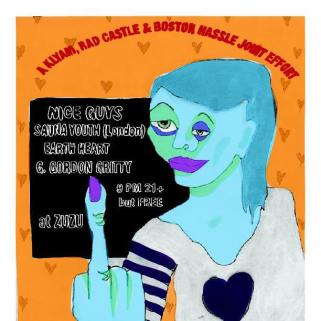 Call it an end of summer noisy punk blowout or a real fun show – either works – this thing is happening soon, MONDAY SEPTEMBER 12 @ 10 PM at ZUZU on Mass Ave in Cambridge. Get your ‘interested’ self off the couch. It’s free and you might want to be of the legal drinking age. This isn’t The Rat circa 1980 or whatever, this is the modern incarnation of an intimate rock ‘n roll night on the town and the fine gents of Rad Castle are grateful enough to host this along with support from the Hassle and ourselves.

So who is playing? Well as you can see on that wonderfully designed flyer by Kristen Koenig – we’re lucky to have long time pals NICE GUYS on this one. They’ve rocked their home basement countless times, they’ve rocked The Sinclair a few times, and ZUZU is certainly a second home. They’ve been exposed as “The Allston Basement Band” and we’ve put out their famous spliff 7″ with Miami Doritos. As Chris described them on here in 2013: “The sounds they make aren’t pretty in the conventional sense, but they sound beautiful to me. My mom says it sounds like the singer is walking on hot coals, maybe, probably not though because that would hurt a lot. This set consists of some crazy Nice Guys tunes like my favorite, “Cop Walk,” which is like Black Flag meets Black Lips. In general, as I’ve stated before, Nice Guys create a sick marriage of garage and early hardcore punk (early 80’s, the only hardcore style I dig). It’s fast, it’s slimy, it’s noisy, and it’s full of slams and shrieks, but best of all it will give your noggin the perfect floggin.” LISTEN: http://niceguys666.bandcamp.com/

SAUNA YOUTH are playing too and if they don’t ring a bell, that might be because they are from overseas, the United Kingdom. The London four piece have a few singles to their name and a real fun full length that came out last summer on Upset The Rhythm. I listen to their bandcamper and think of Swell Maps – you know, cacophonous bursts of punk. Maybe these Youth have more of a penchant for melody. Sounds great! Looking forward to seeing them oh and make sure to donate $$$ to help them along their way in the US. Listen: http://saunayouth.bandcamp.com/

We also got EARTH HEART on this stacked billing! The local three piece put out an album  Homesick just last month. Definitely give that a spin. A great pairing with Sauna, exhibiting some of those same traits that I mentioned above and high energy AF. Only seen ’em once a few months back, really excited for #2! Listen: http://earthheart1.bandcamp.com/

Kicking off the festivities will be my band G. Gordon Gritty. I am still inspired by the bands and musicians that transformed me from a superfan to a creator, heroes like Black Lips, Nobunny, Jay Reatard, Ty Segall, and The King Khan & BBQ Show. Also oldies and soul and bands that dement the foundations of early rock ‘n roll. In reality, it’s probably gonna sound like incoherent noise, but that’s the spirit of a non-musician led rock ‘ roll band. https://gbgordon.bandcamp.com/