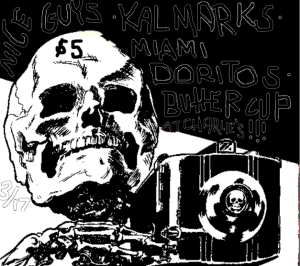 I haven’t been taking care of my show “reviews” the way I should be. You can call me out on it, you can pinch my nipples extra hard when you see me next. Extra hard. So, here’s a show from a few weeks back.

Buttercup – Aww, look at the cute little buttercup, aww. Nope, not these guys. They’ll eat you up and tear you a new asshole. Tear you three. Buttercup is Nathan (guitar/vocals) and Lee (drums) of local favorites Saralee. This performance is a departure from the soft, serene pop of Saralee. Buttercup is blistering noise without a hint or care for melody or pop. With that being said, their song “Fucked You In My Car” has stuck to me for the last few weeks. It’s sticky.

Rough, unsafe at any speed, and harmful for all ages. Buttercup: http://www.youtube.com/watch?v=tE1sKFwe9j8

Miami Doritos – The Miami Doreets are back in Boston! These Doreets just got back from a slammin’ tour with fellow rough riders NICE GUYS and they aren’t even stopping for a breather.

I first saw Miami Doritos last July and in the subsequent months I have come to adore everything about them. Which is actually funny because I often have a hard time describing the band to people. Mad people (I don’t know why they are so maddd) will go up to me and say “hey, what’s up with these doritos? Are they really from Miami? What’s going on? Who am I?” I don’t know what to tell them, but here’s a shot. Musically, this vocals/guitar/drums based two piece, are a rough mixture of  bizarre garage punk and screechy noise pop. It’s not all brutality though, they are a fun, charming bunch of ragamuffins.

I’ve never been to Charlie’s before. I know, it’s whack, but I also have never lived in the city. It’s a tight venue and the place is bumpin’, bumpin’ to the doreets in all their wacky goodness. For more wacky goodness. Hit up their bandcamp: http://miamidoritos.bandcamp.com/

Kal Marks – Kal Marks is a straight up epic band. It’s hard not to get swept away in this group’s overwhelming sound and emotion. They have almost a classic rock feel to them, but not in a cheesy or pretentious way.

I’ve seen Kal Marks several times over the years, but this is the first time my brother has seen them and he’s going nuts and he’s not the only one. Alas, we have to depart earlier than expected on this evening and aren’t able to catch the full set :(. In time, we’ll catch you again Kal. http://kalmarks.bandcamp.com/

Nice Guys – The name ain’t a misnomer! Listen to them here: http://niceguys666.bandcamp.com/ and seriously pick up a copy of the Nice Guys/Miami Doritos Splifft 7″ from KLYAM Records!