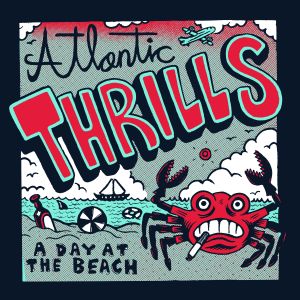 Yeah Yeah I know this show is old as shit, but just go with it.

Vundabar – It’s a pleasure to be back at the Wilder Zangcraft, since I haven’t been to a show here since April, damn. Ahh Lowell how I have missed you all Summer… but at least I’m here now, back in my old stomping grounds. And indeed stomp I will.  I’m actually a little zonked at this point, having spent the previous evening slobbering over Hunx and His Punx at Brighton Music Hall. That was a fun time and I’m still recovering, luckily Vundabar is loud and epic enough to wake me up,

I heard of these fellas at least a few months back, but I have only listened to bits and pieces of their music. Nonetheless, this is my first Vundabar live experience and it is going well. The songs are relatively smooth and easy to get into. I liken them to The Walkmen and Tapes ‘n’ Tapes, but that’s just me. Take it for what it’s worth though, those are great bands.  Vundabar feels like a decent soundtrack for one of those lazy nights at the beach (I don’t like beaches in general, but if I had to pick I’d go at night), when you do nothing but lay back, drink Coronas, and let the water soak your restless legs.

Vundabar make it a point to note that they spent the day playing at Allston DIY Fest and had a blast. Way to go dudes.  I’ll see you around. http://vundabar.bandcamp.com/

The Ghost of Electricity – The Ghost of Electricity is a two piece featuring the likes of Kevin Dacey (drums/vocals) and Ray McNamara (vocals/guitar). As with Vundabar, this is my first time seeing the band, but I have seen Dacey slay on the drums in previous groups such as The Real Tom Hanks, Twin Cyclist, and the far out trance that is Chillcity Icon. Ghost however is very different from all of those institutions (are band institutions? I think so). The pair play a folky psychedelic jam styled take on pop music for lack of a better term. It’s not too experimental, but not your run of the mill rock band either. It’s in that luscious sea of middlegroundness.

One of the more memorable aspects of The Ghost of Electricity’s performance is vocalist, Ray McNamara’s distinctive, faux British accent, making him sound like John Lennon or one of those characters. This British voice often comes up in between songs when Ray chats with the audience.

The band concludes the set with an unexpected cover of Animal Collective’s “Peacebone,” which really energizes me because this is easily one of my top five favorite Animal Collective songs and it is the opening track off of the greatest Animal Collective LP Strawberry Jam (2007). For a healthy five minutes or so I am set back to junior year of high school, what a confusing and frustrating time in a young man’s life… ehh.. despite the crazy emotions this song evokes in me Ghost create a decent cover that sounds vastly different from the original, yet still has that amped up feeling that an Animal Collective tune can elicit so well.

The Ghost of Electricity also spent their day performing at Allston DIY Fest and in fact they play many a show including a couple this weekend. Tonight (9/26) they will be playing at UMass Lowell’s Fox Common and tomorrow they are hitting up Lowell’s unchARTed art gallery. Sweet, check em’ out: http://theghostofelectricity.bandcamp.com/album/the-ghost-of-electricity

Atlantic Thrills – Atlantic Thrills are typically described as “garage,” “punk,” “rock ‘n’ roll,” and that’s all valid. But, it’s just really excellent music to get sloppy drunk and stumbling around to – which is usually great rock ‘n’ roll music orrrr Lady Gaga. It could go either way. Thankfully in this instance, it is truly great  rock ‘n’ roll music. For me, they are like the ultimate party band with Black Lips being probably the only exception to that.  With the Thrillz, it’s always a wild, drunken, hooting and hollering time; I find myself unable to stand up straight and behave like a regular dude. Regular dudes suck though.

At this point in the evening, my 12 pack of Natti Ice is vanishing, placing me in the perfect frame of mind for a Thrillz set. And the Wilder Zangcraft is one of the best, if not Thee best places to catch an Atlantic Thrills show. It’s a tiny little space, a tight squeeze, everyone is all sweaty and on top of one another anyway, might as well dance.

Well, tonight’s show is definitely fun and some moshing ensues, but it’s not as ‘crazy’ as the last Thrillz show I saw here and I attribute this to a lower number of people in attendance. Nonetheless, I still get my rocks off, if you will,  going nuts over the classics and stumbling about – what a daring soul would call dancing. You know you’re shit cocked when you’re trying to dance with Kevin Dacey instead of attempting to make out with fine babes. That’s ok, it’s the spirit that counts. LISTEN right here  to one  of the best bands around! https://soundcloud.com/atlantic-thrills

Televibes – Straight up, I don’t recall much of this set and by much I mean practically nothing. Not a flaw of the band by any stretch, but after Atlantic Thrills I sort of “browned out” to quote It’s Always Sunny in  Philadelphia, where you can only remember bits and pieces (see this: http://www.youtube.com/watch?v=QePQTMY9dv0). I remember watching the band, being mere inches away from their psychedelic soulss and gazing in admiration. I also met some of the dudes earlier in the evening and they were swell guys. I’ve heard some folks compare them to The New Highway Hymnal and I can see that. So yeah, go ahead and check these cats out if  that aggressive psych rock style is your thang. http://thetelevibes.bandcamp.com/