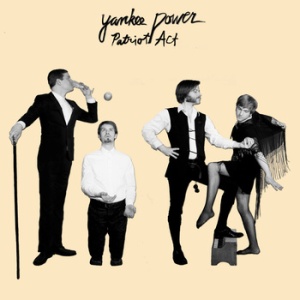 The Stampede – I hardly feel it. The Stampede are loud and they do their rock thang, but it’s rock, not rock ‘n’ roll, that ‘n’/and makes a key difference. You ever hear anyone describe Nobunny as “rock?” I haven’t. It ain’t rock high school either, it’s Rock ‘n’ Roll High School. Alas, The Stampede are a “rock” band playing typical, generic rock music you hear on modern, mainstream radio. To quote a pal of mine also in attendance, they have their Sublime song, their White Stripes song, their Chilli Peppers song. Now, to be fair, that very well may be the way you swang and in that case, The Stampede might be your thang. For what it’s worth, a large chunk of the crowd dance their asses off, so they must enjoy it.  Not the worst band I’ve seen, but I’ve seen so much better. For the first couple songs, I can give them a chance and nod along, hey the singer/guitarist looks like Jared Swilley, but after a little while all I can think is “damn, this is too normal!  Give me some punk slime, give me The Electric Street Queens! I’ll even take a whacked out Gangbang Gordon Karaoke session over this, please just make it stop, it’s been too long!”  Thank God,  my boys, Yankee Power are up next.

Yankee Power – I felt a kinship with vocalist/guitarist Jeff Gallagher the moment I met him at keyboardist Ben Tan’s party last August. He seemed like a gentleman, a Beatles man’s kind of guy, like a 21st century Beatle. I finally had the opportunity to see Yankee Power, which also includes Thomas Calvert (vocals/guitar), Mark Fallon (vocals/bass), and CJ Kanouff (drums) on December 29, 2012 at the Middle East Upstairs and that show was fantastic, featuring a cover of my favorite Beatles song “Hey Bulldog.” I told you Jeff was a Beatles man’s kind of guy. Well, nearly five months later, that charm is still intact and they are showing off some new songs to boot.

The Yanks, as I like to call them, are a fun live band and they play several of their classics from last year’s magnum opus Zoo Traffic. “Swing” is a slick, 50’s styled rockabilly number and one of the best from the aforementioned LP. “Real Folk” is also on display tonight and features some sweet vocals from Thomas Calvert. The band also play some new cuts from their latest release, Patriot Act [EP] including my favorite, “Hot Honey Jazz.” I can recall the band performing this song at the Middle East show, though up until this evening I haven’t listened to the tune since that show – nonetheless the song is so catchy, when they start playing it I recognize it immediately. “Hot Honey Jazz” has a smooth, 80’s vibe to it and could arguably be Yankee Power’s catchiest/finest song to date.

Yankee Power live is a pleasant experience and I can’t recommend the band enough, on stage and on record, but this performance is a bit sloppy, which is unusual for the band. Often sloppiness is an intoxicating ingredient in the rock ‘n’ roll dish, but in this case, The Yanks are fairly clean folk, so the sloppiness doesn’t really help. With that being said, it doesn’t overly hinder their performance either and all of their great qualities emerge beyond some troubling, technical difficulties. Besides having exquisite songs, this quartet has a lighthearted, fun loving sense of humor, which can be quite entertaining for the audience. I always get a kick out of Jeff Gallagher’s dance moves, whether it be his smug booty shaking or the way he awkwardly positions himself up against his band mates. In either case, it’s a subtle, silly characteristic that I thoroughly enjoy about this band.

Listen to Yankee Power, so you can know, love, and sing along to all of the songs at the next show. http://theyankeepower.bandcamp.com/

Goddamn, I’m trying so hard not to make my reviews so flowery, but some of you cats are just too damn GOOD!

Dave Crespo’s After Party – Dave Crespo and his After Party have a lot of enthusiasm and attempt to make the Rosebud feel like a party for sure; Dave Crespo even pats my head, for whatever reason people like to do that. I say attempt because like the first band tonight, this is not the kind of music that sets my rocks off. “Generic Rock” is what I call it, it’s like the FM Rock music on the radio. No thanks.

I heard that this is the last show at the Rosebud. Is that true??? If it is, then RIP. I saw some of my favorite bands here: Fat Creeps, Fagettes, and now Yankee Power. I hardly knew ye, but so long. Twas great while it lasted.