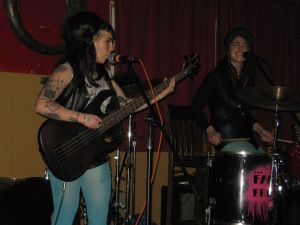 Act I: The Electric Street Queens– I have seen countless two pieces in my day, but I don’t think I’ve ever seen a two piece consisting of two ladies. I’ve seen two dudes, one dude and one dudette, but never two dudettes. Electric Street Queens, where have you been all of my life?! Electric Street Queens is Melanie Bernier ( also of Fagettes- I admired her drumming in the past) on drums and vocals and Coco Roy on bass and vocals, so basically the greatest duo of all time. Simon & Garfunkel ain’t got shit on you! This is some real good shit, don’t walk away…. if I could hold a live LP from these gals in the palm of my hand, I’d be a happy man. But, for now I have to cherish the moment. And indeed it was a great moment. Like The Coathangers, but better and sassier. Simple, stripped down songs- very catchy, fun, playful/nasty sense of humor. I can relate to that, being a sick bastard myself. They don’t seem to take themselves too seriously, which is always refreshing to see. Like I said, funny songs about beefcakes and bruises, puke and scum, you know the usual Thanksgiving family dinner convo. There is also plenty of in between song banter, such as cracking jokes about diapers and other sexualized comments that I love to hear.  The band’s closer “Doncha Want To Work At The Brewery” is an amusing, macho, testosterone drippin’ anthem that demands the universal question stated in the title. During the song, Coco makes her way out to the crowd, rockin’ right up against KLYAM’s very own Glen! I’m sure he’s now looking for employment in one of our local breweries.

Act II: Secret Lover–  The whole band sounds delightful, for lack of a better adjective, okay we’ll go with peachy keen, sure that works, I prefer that. Secret Lover sounds fairly dynamic, especially the lead vocalist. I enjoy watching her slither on and off stage, twirling the mike with ease. She has a loud, powerful voice that sounds familiar, but I can’t quite explain what or who it is. I recognize the last song they play, “Rubber.” It’s a catchy, little number and the backing vocals (“bahhh buppp bah bah bah”) are memorable.  Check out their music here: http://secretlover.bandcamp.com/

Act III: Fat Creeps– This is my first time seeing the Fat Creeps at PA’s Lounge. YAYYY!!!!  Before this moment in time, I had to solely rely on You Tube videos (http://www.youtube.com/watch?v=YkFImOf5kZI) Tonight, they switch things up by opening with what are in my opinion (and I can imagine others) their strongest songs “Nancy Drew” and “700 Parts”. These are tunes that typically fall towards the end of their sets, but I must say I like seeing them at the front of the set, starting the show on a solid note. In general, the sound is excellent, and much of this is a debt to PA’s sound system, but it’s not just that. I think this is simply one of the Creeps’ best shows, at least one of the best I’ve seen. I announce this 700 times on the ride home as Glen can testify. Okay Chris, settle down, have another Narragansett please. My favorite part of their performance is the transition from “Dad Weed” to “Daydreaming,”  it’s practically one big ass pop song, it’s continuous, one right into the next. Creeps stand outs, “Fooled” and “Secrets” and two new numbers “Go to the Party” and the cute, little instrumental closer “Back to School” round out the set. The latter can be seen below, shot by good old Bernie.

P.S. I can’t forget to mention that there is a brief “O-o-h Child” (Five Stairsteps) interlude at some point during their set. I’d love to hear a full fledged cover! Whenever I hear this song I think of the movie Over The Edge (1979), y’all know this flick? No? Know it.

Act III: 28 Degrees Taurus–  Our second two piece of the evening, 28 Degrees Taurus headlines tonight’s show. The band consists of  Karina Dacosta on drums and vocals and Jinsen Liu on guitar and vocals. They have a very atmospheric/pop song dynamic to them that I liken to that of No Age, and no not just because they are also a vocals/drums  and guitar duo. I mean there certainly is that element,  but the mellow, atmospheric  meets hard edge punk feel strikes me more. Glen hears this as well and makes a comparison to early Wavves, particularly the live show circa September 2009 when it was just Nathan Williams and Zach Hill in the band. I do not walk away with this impression as much, but I guess that’s because I wasn’t cool enough to catch that Wavves show way back when brah. Anyway, I dig the first few songs, but after a while they start to fade on me and I feel a little bored. Listening to their bandcamp page now, I feel less bored though and I enjoy some of their songs much more. Overall, the set just seems too long, but the band appears to be having a lot of fun and that’s all that matters. Not to mention, various attendees are intensely fascinated by their set. Lastly, I am just finding out now that this group has been active since 2005, which is pretty rad, what’s also rad is the fact that they list artists as diverse as The Carpenters to Lightning Bolt as influences on their facebook page. Right on!
Check out their bandcamp here, you can listen to a shit ton of releases from over the years: http://28degreestaurus.bandcamp.com/

Most of this review was written under the influence of Genesee, Busch Light, and The Cardigans’ “LoveFool” on repeat.