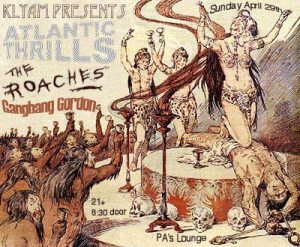 Act II: The Roaches– The Roaches keep the garage rock flowing, but this time with much more musical chops. I have never seen the Roaches, but I have been meaning to for about a year. In fact, Glen and I actually met Eric and Joe Roach at PA’s Lounge, nearly two years ago during an epic Nobunny show. Great times! and the great times would continue on this evening. As I pound back a few more beers, the Roaches unleash a fiery performance filled with Oblivians esque garage rock. I love the guitar sound; these guys have some seriously great guitar riffs rolling. The bass is equally raw and the drums are fast and pouding. It’s a sweaty set that demolishes what is left of my hearing.

Act III: Atlantic Thrills: Atlantic Thrills is a fantastic way to conclude our evening of fun, garage rock and roll. In the past year I have seen them a few times now and each time it truly gets better. With the Thrills, the small crowd, really take it up a notch. People are dancing and moshing, singing their lungs out, the whole nine. Simply put, having fun. It is a classic Thrills set: psychedelia, fast rock and roll, slow ballads, and unmatched odes to the Black Lips and the King Khan & BBQ Show. They open with the strong rocker and one of my favorites, “Give It Back.” “Shotgun” and “On My Mind” are also stand outs to me personally. The set concludes with two classics. The first being an unexpectd, Los Sacios cover, “Demolicion,” which is the equivalent to injecting steroids for a garage rocker. The song instantly gets the KLYAM & friends rockin’and singing along! The final number is Thrills classic “Acid Rain,” the perfect way to end the night.

I want to say thanks to all that came and particpated in the first Kids Like You & Me Presents show! Stay tuned for many more.