Cymbals Eat Guitars: A very young band that doesn’t sound musically immature in the least. These guys played a very polished set that sometimes bordered on hardcore punk  and power pop at other times. The lead singer, Joseph D’Agostino, said to his fellow band mates after the second song “My left ear is shot. Between soundcheck and this.” That didn’t seem to make a difference at all. Cymbals was about passion all the way through. They played most songs off their debut Why There Are Mountains in addition to a couple new ones off an EP that will be released on September 22. Their most noteworthy song was “And the Hazy Sea.” Their last song “Wind Phoenix” was correctly predicted by a shouting fan in the audience. Neil the bass player responded “whoever just said ‘Wind Phoenix’ wins.” And that was a great song to cap off the set!

The Depreciation Guild: The Depreciation weren’t bad. They had a projector that featured various rainbow-esque patterns. That was different. A little thing that confused me about this band was that there didn’t seem to be a need for a drummer. The drum machine seemed to work fine along with the plethora of effects pedals. Their sound was somewhere between ’80s new wave and modern day neo-psychedelia. Unfortunately, there weren’t many “noteworthy” tracks. They all sounded roughly the same. I don’t think I’d want to watch them again, but they fall in a line of average-ness that seems to be a hallmark of opening acts.

The Pains of Being Pure at Heart: From the opening chords of “This Love is Fucking Right” I knew the Pains would be awesome! And they did put on a terrific show. Of course, probably like many audience members, I am a very big fan of their self-titled debut. My eyes were fixated on the band so I didn’t get a chance to see audience reaction behind me, but I’m sure people were grooving and singing along. They played “Young Adult Fic 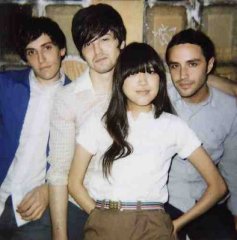 tion” second, a solid choice…I love the title and play-on song meaning: two people hooking up in the library. They followed with a non-debut album track “103” before playing three more album favorites: “The Tenure Itch” (about student-teacher relationships according to Kip Berman, lead singer), “Stay Alive” (a jangly twee pop number) and “A Teenager in Love” (kick-ass drum beat). After this they stopped for a brief moment as Kip reminded concert-goers that it would be perfectly cool for them to leave if they had to catch a train. He knew the deal from living in Boston. I feel bad if anyone did leave since they sure missed a great second half of the set. A brand new song “Higher Than the Stars” was played then the classic 4 note pop-punk jam “Come Saturday” followed. Another new one “Twins” was showcased before the catchy “Everything With You.” The final song before the encore was “The Pains of Being Pure at Heart,” which was well-done as expected. The encore was “Gentle Son,” the album closer off their self-titled. The band, uber-appreciative of the crowd, thanked us and left the stage. It was too bad they couldn’t play each and every song off Pains, but then again I haven’t encountered a band that played an entire album start-to-finish. Maybe someday. A quick note: Peggy Wang’s backing vocals were awesome! They must be appreciated.