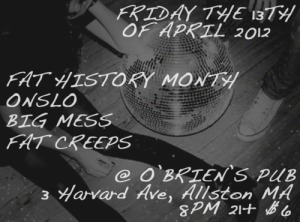 Seeing a show at O’Brien’s Pub has been on the KLYAM to do list for roughly two years now. Yes, it is true, this is our first time at O’Brien’s tonight as I imagine it sounds like blasphemy to some of you. Well as Glen always points out, there is a first for everything. Before even entering OBs I did a little research which translates into me looking at the site’s archives. I’m an archives aficionado, so  I literally read every event from the present all the way  back until the first show documented at OBs back in 2006. Over the past six years, this Allston venue has been committed to both local (and national)independent music and various KLYAM favorites have  graced the pub with their prescence: Box Elders (3 times in ’09!), Maine Coons, Colleen Green, Growlers, Mika Miko, and tonight’s headliner Fat History Month (with shows dating as far back as ’07). The venue is small, but there is plenty of room. Upon entrance we meet Chett, who checks our IDs, and gives us those little hand stamps.  Per usual Glen has his barrage of questions, and to a lesser extent so do I, which Chett happily answers. We discuss the ins and outs of booking and promoting shows, and the prospect of a Kid Like You & Me Presents! show at OBs, which will hopefully happen in the near future as soon as we get everything straightened out, cool.  Doug, the “sound guy,” tells us  a little more about his plesant experience at OB’s, playing  in and booking local bands, and just a general overview of how things work in such settings. This is not all new to us, but it is certainly helpful. Thanks for the info guys, much appreciated. By this point, I am knocking back a few PBRs, thanks Jim! and I am ready to hear some fine rock and roll music. Just like you are probably wondering why I have not said anything yet about the music, if you have made it this far. Well, back to what I said earlier, we have had our eye on O’Brien’s Pub as a notable host  for excellent, KLYAM oriented bands, for about two years now, and for various reasons (mainly us being underage until recently) we have not had a chance to see any of the shows we have recommened on KLYAM, but now is our time.  April 13, 2012, I am going to go out on a limb and say this is the best Friday the 13th I have ever had. Fat History and Big Mess, my two local favorites, on a bill with two other, highly visible, Boston bands (Fat Creeps and Onslo) for six bucks in a self-described “cozy” bar in Allston, I’ll take it. So, finally let’s get to the show.

Act I: Fat Creeps– “When I walked in it looked like something out of a Quentin Tarantino movie,”- Cory Bell from SKIMASK, a band you should check out if you have not already. That might be parphrasing, but that is the gist of Mr. Bell’s sentiments. And, I agree with him. Though, I myself do not instantly conjure up an image related to a Tarantino flick, I think I know what he means. There is something visually striking about the Fat Creeps. Green hair aside, they are kinda weird and their music and overall presentation seems to distinguish itself from other bands. This is the first time I have seen the Fat Creeps and I honestly never checked out their music until a few hours before the show, but I have noticed that their name has popped up a lot recently in local listings and recommendations. So, going into this performance I am excited. They have a new drummer and he is pretty tight, almost a contrast to the other two members. But, I don’t mean that in any negative way. I think their lack of musicianship (if you want to call it that)  is part of their charm. It is the Fat Creeps’s imperfections that make them unique. For example, when the band begins their set they have a few false starts, but when they get it right, they kill it.  The songs are great, the riffs are simple, but strong and definitely catchy. And the vocals, damn! Probably my favorite part of their music is the vocals. Sometimes they sound whiny, almost cranky, but it fits perfectly with their music. I remember Cole Alexander from the Black Lips once said that kids need to hear NOT American Idol voices in music. Kids need to hear Fat Creeps! Their energy and attitude is always present. I recognize some of the songs, which I want to point out as another trait that separates Fat Creeps from most bands I see: their songs are easily recognizable. I only had to hear some of the songs once for me to remember them tonight, a rare quality indeed. I will definitely pay attention to Fat Creeps from now on and I plan on seeing them again the next time I get a chance. Check out their band camp page!  http://fatcreeps.bandcamp.com/

P.S. they are pretty easy on the eyes ;)

Act II: Big Mess– I listen to Big Mess a lot these days, so it is always a pleasure of mine to see the band in action. In fact when they begin playing I start to realize how much I miss seeing them live; it has been about five weeks and I am going through withdrawal.  The recordings are sound, but Big Mess live is a whole other beast. The songs focus heavily on volume and since they are instrumental you pay attention more to the sonic side of music or at least I do because I typically do not listen to strictly instrumental music. Live, the songs hit you harder, and well come alive. Having seen them several time now, I know their set, but with this performance they really switch it up and play around with their songs, while still unleashing the classics. They open with a nice little jam before smoothly kicking into “The Hook.”  It just gets me more pumped up for the song and their entire set even more than usual. Also,  on this evening bassist Josh Tracy provides some sick vocals, which is new to me. If you have not seen Big Mess yet, then you FAIL AT LIFE. They have been together since 1993! You’ve had your whole FUCKING life to think things over. You can redeem yourself by listening to their Band Camp page. Do it! http://bigmessma.bandcamp.com/album/big-mess

Act III: ONSLO– Onslo keep the energy high with a fun, loud, rocking performance. All of the members look like they are having a lot of fun, laughing amongst each other and cracking jokes about the lack of females in the audience, at some moments as little as three! Overall, Onslo is a decent band, but they just don’t do a whole lot for me. I really cannot put my finger on it, but I guess for my money they are not as distinguishable as the other three bands this evening. But, don’t take my word for it, see for yourself. Here’s their band camp page: http://onslo.bandcamp.com/

Act IV: Fat History Month-When Fat History Month hit the stage more people come up front, practically standing over the band, making it feel more like a show at a basement venue, which is where I usually see Fat History Month. The band opens with Fucking Despair classic “No Safe,” which has a great Pavement flavor to it. Short, but sweet and gets me pumped up for the rest of their performance. Fat History are one of the finest live acts I have seen in the past year and their performances are always intimate. I honestly cannot imagine seeing them on a big stage, that would be a real buzzkill. I love standing inches away from Mark’s drum kit. Mark (not Jeff contrary to popular opinion)  is a steady drummer, always keeping his head low and keeping in touch with the music. The duo quickly run through Fat History anthems “Old Lady Smokers” and “Things I Enjoy,” which always bring a smile to my face. I think these particular songs sound better on record, because the “hooks” are not quite translated live. But, that’s the thing, Fat History is not the kind of band that gives you what you expect or perform the songs as they sound on the record. And I am glad for that, that would be boring, after all. They are performed well live, let’s not mince words here, but it is certainly different. With that being said, if you saw them live and have not listened to their music,  seriously pick up Fucking Despair and/or  watch some of their amusing music videos. They also play some new material or perahps old material I have not heard yet? They close the set, asking the audience what they want to hear. It seems like most (including myself) want to hear “Nature,” especially the ladies (the very few of them!). They play “Nature,” and as always it is invigorating. I love the build up from the repeated line “It gets better” to “and then it gets WORSE.”  There is something really cathartic about that line, especially hearing it live. Five Fat History Month shows deep, for me it never gets worse.  http://fathistorymonth.bandcamp.com/ Check out Fucking Despair as well as their other releases Gorilla and the Safe and Sound 7″

Also, here’s a link to an awesome Dig Boston interview from February 8, 2011: http://digboston.com/listen/2011/02/gimmie-shelter-fat-history-month/