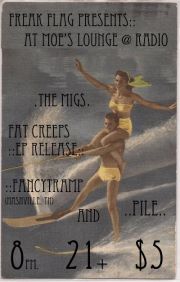 Artists: Freak Flag Presents- The Migs, Fat Creeps (EP Release), Fancytramp, Pile
Date: Friday, August 10, 2012
Venue: Moe’s Lounge (@ Radio) (Somerville, MA)
Comments:
Act I: The Migs!–   Alright hotshot you think you know your rock ‘n’ roll? You don’t know shit if you don’t know the Migs. The Migs are Dover, New Hampshire’s greatest creation and one of thee finest rock ‘n’ roll/garage/punk slime bands KLYAM has had the privilege to see live. Not to mention our Band of the Week (month). Tonight is my third time seeing these fine gentlemen, but Glen has never had the pleasure and part of my excitement stems from observing Glen’s reaction to their fun filled performance. Surely, Migs on recording is peachy keen, but Migs in the flesh rubbing up against you is a whole other beast.  From the first few seconds of the band’s perennial chant “WE’RE THE MIGS!” to the final, frantic moments of guitar feedback, The Migs put on one helluva show, a real physical performance of never ending enthusiasm and joy.  I seriously cannot think of too many other  bands that are having as much fun on stage as these guys. Their energy and rock ‘n’ roll spirit is fun to experience and in particular what I love about the Migs is how they make their show interactive with the audience. Singer/guitarist Kevin Lareau spends most of the set lurking around the crowd, which is always great!  I dig his display of showmanship, the whole band truly put their balls into this performance, making the loose, garage styled music they champion come all the more to life. Alas, the spectators do not seem to give back the energy the Migs offer them, but these dudes don’t give a fuck, they just keep rockin like true party animals. In fact fuck garage, call it “party rock.”  If it was 1960 they would all be in jail.
Hey Burger Recrords or any other amazing record label click this: http://themigs.bandcamp.com/

Act II: Fat Creeps-  To put it simply, over the past few months Fat Creeps have become a massive KLYAM fave, not just one of best around Boston, but one of best bands in general. I know that may sound crazy to some readers, but it is true. Their songs are stripped down, no filler, instant pop gems. I stress the instant quality. Each number has a clear and catchy hook(s) that rests smoothly in my gulliver for hours at a time, often making work significantly less painful. Tonight, the Creeps are releasing their EP, which contains most of the classics, including my personal favorite, “Secrets.”  Much like the Migs, the Fat Creeps are awesome in the studio, but the live experience is outstanding. I know I am really sucking the band’s  dick (which would actually only be one dick), but I am truly flabbergasted by their performance. Mariam Saleh’s vocals on “Secrets” are even more powerful live, and it hit me during this show that her voice reminds me of Sara’s from local fave SARALEE. I don’t know if anyone else hears this, but I definitely see some resemblances. Or maybe I am just really fucked up? Which is a definite possiblity (reality). The band introduces us to some new tracks entitled “Dad Weed” and “Daydreaming,” which can be seen in the You Tube clip below.  They also play two kickass covers in the form of Gun Club’s “Sex Beat” and Devo’s “Gates of Steel,” both of which have become  Creeps  classics in their own right.  Overall, this is the best show I have seen from them, each time gets better! Or I have become more of an excessive fan.  I think it is a little bit of both.
Here is the tracklist for the EP:
1) Secrets
2) Horoscope
3) Fooled
4) Leave Her Alone
5) Cherry
6) 700 Parts
LISTEN TO IT HERE! http://fatcreeps.bandcamp.com/

Act III: Fancytramp– Cool band name! Fancytramp are fresh out of Nashville, Tennessee- a place which has unleashed several fine bands in the past few years and these dudes are no exception to that. They have a nice blend of garage rock and noise, and I am definitely feeling Sonic Youth vibes. What I really like about Fancytramp is the way they communicate with the audience, making jokes and praisng the other bands on the bill, amongst other in between song banter. Their set certainly does a number on my ears and this serves as a healthy reminder that I need to pick up some earplugs soon. The volume of their music is not a bad thing though. I also want to note the fact that one of the member’s mothers came out to the show (well for the whole tour I presume), which is great! I would like to see that kind of parental support more often at rock shows.  Check out Fancytramp’s new EP Singing Tower At Sunset: http://fancytramp.bandcamp.com/

Act IV: Pile– Pile is a band that frequently comes up in conversation when discussing noteworthy Boston bands; hell they toured with Fat History Month! That right there is enough to spark my interest. Admittedly, I do not know too much about Pile coming into this show and honestly I cannot remember most of their performance. BUT! I do notice that they garner the biggest crowd response the whole evening, with some moshing erupting during their set. Listening to their Bandcamp now, I can defintely see what folks are raving about,  check it out here: http://pile.bandcamp.com/ I will have to see the band again in the future and give them the attention they deserve.

So, this was KLYAM’s first time seeing a show at  Moe’s Lounge and it was a blast! It’s a cool, little, “basement” esque venue, I’d recommend the place. I was also glad to see some familiar faces, I think this show gets the award for most kids from my hometown haha. More importantly thank you to FREAK FLAG (Cory, Ellie, Anya) for being totally rad and putting on this show!!! Their DJ’n was superb and fit really well with the music and mood of Moe’s Lounge on this particular evening. I especially loved hearing Black Flag’s “TV Party” (the EP version)!