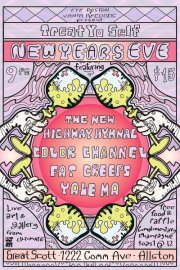 Act I: Yale, Massachusetts– Yale, Massachusetts play a sort of familiar, pop punk sound that isn’t too harsh on the ears.  It’s not really my style, but I don’t hate it either.  They remind me of Weezer and Bent Shapes, and not just because of the glasses. Hell, Rivers Cuomo isn’t even wearing glasses in the “Buddy Holly” music video! You know, I think someone even yells out “Weezer!” I could just be making that up though, ohh well.  A former bassist of the band joins them on stage for a quick song filled with impassioned vocals.  Check out their bandcamp page here: http://yalemassachusetts.bandcamp.com/

Act II: Fat Creeps– You’d think after nearly a dozen  Fat Creeps show reviews, this process would feel stale or vapid, but it honestly doesn’t.   The Creeps are one of my favorite bands, so naturally I want to see them live as much as possible. When Glen and I started KLYAM we didn’t really have any specific directions or intentions, we simply wrote about our passions, our experiences, our thoughts and reactions, and specifically our tastes, with music playing a bigger and bigger role as time went on. It slowly evolved into its own thing as we started attending and reviewing more of our favorite bands’ shows.  Alas, back when we started we had to wait another year or so to catch the next Black Lips or No Age show. But, of course, as excess is in our nature, we reviewed all of them. In the time since then we started to pay more attention to local music and now we have the opportunity to see some of our favorite bands quite frequently. So now, I see it as our privilege to see and write about the Fat Creeps on a regular basis.  After all, why wouldn’t you want to see one of your favorite bands over and over again? Alright, I’ve babbled again, to the show. Both Glen and I feel like this is one of their best performances. I know that also sounds like a stock line.  I assure you, it’s not.  I could tell you which shows were superb and which were just solid.  This can easily be detected by a line such as “this was one of the best Fat Creeps shows” like the one I wrote earlier. So anyway, what makes this show stand out above all is the sound.  I love the PA at the Great Scott. Generally speaking, I think most bands simply sound better here.  The songs come through clear and hit me with this massive wall of sound.  They open with what I see as their signature song, the quirky, Beat Happening  esque, “Nancy Drew”  and follow it with their best song, the ominous ballad, “700 Parts.”  They play several Creeps standards like “Secrets” in which Mariam belts out one of my favorite lines “COME CLOSER I CAN’T HEAR YOU!” with a commanding howl that stacks up there with the harsh delivery of Kim Gordon (though I actually prefer Mariam’s voice). What makes this moment even more memorable is Ben Tan standing behind me, screaming out his lungs along with Mariam.  Haha, you wild child you.  Overall, this set seems heavier than usual, which is never a bad thing.  This is notable during one of their new songs, “He Comes In Loudly” and a nasty cover of X’s “Nausea” (seen below). Lastly, the visual, which is often a key ingredient in an unforgettable Creeps show- green hair, black leather jackets, early 20th century dresses, Laconia tee shirts, etc, is outstanding.  The Lysergic Factory Light Show’s psychedelic/acid trippy colors reflect nicely over Mariam’s and Gracie’s red, velvet attire. I’m pumped for the next show!

Act III: Color Channel– Never heard of Color Channel until tonight. They are pretty cool, electronica/power pop is the best way to describe their music. I see elements of Head Automatica in them with all of the excitement and dancing, and perhaps more mainstream tendencies.  This transfers well into the audience which is packed, more people are up front dancing than for any other band on the bill.  Color Channel do a decent job of keeping everyone amped up and ready to bring in the new year.  In fact one dude hops into the audience, bashing away at the tambourine.   It is during this set when the clock strikes 12.

Silly string, balloons, kisses, and champagne galore.  Then Color Channel continues their set.  It’s an entertaining performance, no doubt, but not really my bag baby, a little bit longer than I needed. http://colorchannel.bandcamp.com/

Act IV: The New Highway Hymnal– The NewHighway Hymnal at the Great Scott, ahh an awesome way to kick off the new year.  Lead guitarist/vocalist Hadden Stemp notes this as well, saying they are happy to be everyone’s “first band of 2013.” This is technically my first time seeing them as a trio and they sound just as sick.  This is also my first time seeing them on a bigger stage, P.A.’s Lounge doesn’t really count.  In the past, I have seen them mostly in basements and one time awkwardly alone, behind a screen glass window at WUML. Point is, they’ve played so many clubs/bars over the years, especially Great Scott,  it’s nice  to finally see them in this larger setting.  I think they open with “More,” yeah let’s go with that.  A favorite of mine from their LP Whispers, live this song is a beast- loud, fiery, and anthemic. Alas, the crowd has dwindled. I thought there would have been way more people. But, for those of us that stick around, it is a fucking blast and some light moshing ensues. By this point in the night on New Year’s Eve, I can barely stand already, so this is pretty fun.  Also, I can’t  forget to mention just how thrilling it is to have Hadden Stemp hurl his body (guitar in arms) off stage at you. Definitely best New Years Eve I’ve had in quite some time. http://thenewhighwayhymnal.bandcamp.com/