Black Lips: How to Punk Rock the Middle East – Beer Pong in Beirut! from Matias Nordahl Carlsen on Vimeo.

Check out this fun video from 2famous TV. Thanks for the hook up Matias! http://2famous.tv/2012/10/25/black-lips-how-to-punk-rock-the-middle-east-beer-pong-in-beirut/ 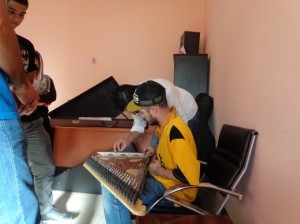 “After a last minute scramble to find a spot to play and some cautiously limited promotion, a low-key show ensued, which for me really revealed the non-commercial nature of the band that demonstrably stands in contrast with the band’s recent studio produced work alongside prodigious producer Mark Ronson.”- Crack Magazine

This is a fantastic point. The Black Lips (and all involved) really aren’t getting the recognition they deserve for organizing and completing this epic tour. It’s just another example of how they are a distinguished group among their contemporaries. Read the full article and interview with Bill Cody (tour documentary director): http://crackmagazine.net/music/black-lips-in-iraq/