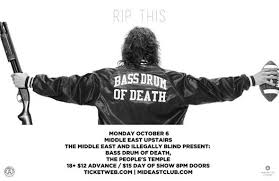 This was the Illegally Blind show I have been waiting for for quite a while. That’s right: 2 Time Super Bowl Champions The Mighty Bass Drum of Death are back in town! For those of you who don’t know. Illegally Blind is Jason Trefts’s booking company.

I saw the opening band Black Beach only about a week earlier blow the roof off of Thieves Grotto. They were probably my favorite band at that party so I was looking forward to seeing them again. They were the perfect local band to open this show. They played pretty much the same set as a week ago but they sounded and looked even better with the lights and projections around the stage. They rip hard and are a force to be reckoned with. John from Bass Drum of Death even commented that they are the best opener he has seen so far on their tour. Big props to Jason for adding them to the bill.

After a brief break Michigan psych 5 piece The People’s Temple came on. This was my first time seeing them. I have heard their recordings and I think that they rock much harder live than on those recordings. For some reason I thought they were going to be more laid back. I guess to keep up with Bass Drum of Death you really gotta rip it. Their singer reminded me a little of Hadden from The New Highway Hymnal. They impressed me.

Now it was time for 2 Time Super Bowl Champions The Mighty Bass Drum of Death to rip everyone a new asshole. The crowd started jostling as soon as John Barrett strummed the opening riff of Velvet Itch. As the heavy hitting jams continued, the crowd just got more wild. The band members long hair went flying around the stage nonstop as they played. Bass Drum of Death just put out a rippin’ new album appropriately titled RIP THIS! So obviously they featured a number of songs from it. They also did a number of my favorite older songs of their such as I Wanna Be Forgotten, Nerve Jamming & Get Found. For some songs there were girls that jumped onstage and danced. Just watch the video of Crawling After You. For their encore they did GB City track Religious Girls and a cover of Spirit In The Sky which at first I wondered if it was BRMC’s Spread Your Love because those songs have similar chord progressions. After the show I got to chill with the guys. They are some of the most awesome nice guys ever. Finally it was time for me to go home and let my bruises heal. This was not the first time I was bruised at a BDOD show.