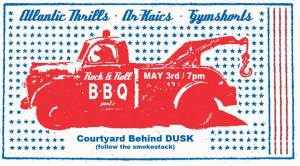 We always love making the trip down to Providence to see our favorite rock ‘n’ roll bands and say hello to some  friends, and who knows maybe make some new ones. Last year’s Rock ‘n’ Roll BBQ was one of my favorite shows ever and certainly the best from last Summer. Ahh the mammaries, I mean the memories. There’s always love and strangeness in the Providence air, isn’t that right Mr. DJ Studs Jerkel? Ahh my main man Studs!

Atlantic Thrills – If you were to make a movie about my youth Atlantic Thrills would have a sure spot on the soundtrack. Hell, they could even have a cameo. Needless to say, we’ve seen these guys a gazillion times and it’s always worth it. It may not be the most original music in the world, but that’s garage rock for you. I’ve come to recognize which bands recreate the sounds of the 60s well and which ones make a mockery of it. The Thrillz are definitely part of the former. Those sweet surf sounds, doo wop slop gang vocals, and catchy guitar licks rest easy on my wounded ears on this breezy  Spring night. Outdoors shows are the best, we need more of these.

It’s an awesome set, but something is missing or I should say someone. Much to my shock, guitarist/vocalist Kelly Riley is no longer in the band. It just isn’t the same without Kelly’s evil glares, hootin’ and hollerin’, and just overall enthusiasm. Definitely a focal part of the music. In his place tonight is Rafay Rashid of fellow Providence rock ‘n’ roll group Ravi Shavi. Rafay does a fine job with the tunes and it feels natural, still you can’t replace Kelly.

The foursome mix Thrillz standards such as “Acid Rain,” “Problems,” “Light Shines,” and more with somewhat newer tunes like “Bed Bugs” and “Almost Anything.” They conclude with an entirely new song (at least to my ears) about waiting for the weekend or something like that. I’ll have to hear it again sometime hopefully sooner than later. https://www.facebook.com/AtlanticThrills

The Ar-Kaics – Keeping the fierce rock ‘n’ roll spirit alive is Richmond, VA’s Ar-Kaics.  I’ve never heard of them until now, but they are more than up our back alley as far as rock ‘n” roll slime goes. They have a similar aesthetic as Atlantic Thrills, but with more of a mellow attitude. With that being said, they have an even greater grip on the 60s sound. I mean this is Back From The Grave shit right down to the bare bone. I also hear Seeds, Sonics, and 13th Floor Elevators. All that good stuff.

Before and after the set we have the pleasure of meeting and chatting with this charming bunch. Johnny gives us a nice little lecture on the history of garage rock and the various garage comps over the years that have helped shaped their style.

Impressed with their music, both Glen and I snag a copy of their “Make It Mine” 7″. It’s a keeper. Hope to see you old souls back in Boston/New England in the near future! CHECK IT OUT: http://thearkaics.bandcamp.com/

Gymshorts – Gymshorts, another local band, carry the garage punk torch and finish up this evening’s trilogy of badass music. These shorts have a like minded sense of loose garage noise, but they pack in a few more punches, a solid kick in the nads. It’s more of the punk in garage punk, if you will. After a while, these terms can get annoying and overused, but I’ll continue to employ them as a point of reference. Or maybe I should play with your head and tell you it’s late 90s swing revival. It could be, it’s just as fun.

I’ve seen the Shorts in Boston and Lowell several times now, but it’s sick to see the band again in their home turf. By the time they hit stage, errr I mean ground I’m feeling A OKAY,  all slop bop, and no pop. Their greasy grimy, feverish gunk only makes me want to flop and plunge to the pavement. In the process, I lose the top button to my shorts – they’re not my pair of gymshorts however, thank God. That would have been just too damn ironic. So, essentially I spend the whole set, rocking out whilst keeping  a grip on my shorts to make sure they don’t fall down on me.  What a sticky situation. I’m telling you guys, weird shit always happens to me in Providence. Oh Brother.