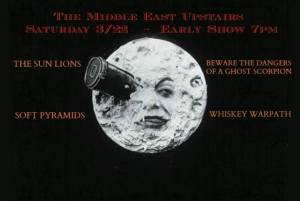 We missed Whiskey Warpath and Soft Pyramids. Damn, next time!

Sun Lions – I have mixed feelings about this band. They are pleasant in some respects, especially in a live setting, but I’m not going bonkers over them either. It’s just too clean and proper for my savage tastes. I need an extra kick in the gut to loosen me up a little bit. This set feels like it lasts forever too. http://thesunlions.bandcamp.com/

Beware The Dangers Of A Ghost Scorpion! – Now, here is a band more to my liking. BTDOAGS is a trippy, all instrumental surf rock outfit, a surf nut’s wet dream, if you will.

Staying true to their name, the guys bear an air of mystery to them. Dressed in black shirts and blue jeans and wearing bandannas that cover most of their faces, they never verbally interact with their audience, not once. Instead, they communicate with their music.

I am always biased when it comes to surf music. I find it hard not to enjoy it, even if it is extremely generic. Frankly, it actually all sounds the same to me, but that’s just it, it’s a sound and one that I never get tired of hearing. Still, BTDOAGS picks it up a notch with their sinister, horror punk take on the genre. Anyway you look at it, it’s fun.

Overall, a strong set, but I’ve seen better from the band. The venue is mostly filled and the crowd is digging the band, rightfully so, but I’d rather see at least one of the members leap off the stage and dance around with the audience or entice them to move more as I have seen in the past. Regardless, always a pleasure to see these dudes. BTDOAGS in a basement/underground setting, now that is something I need to see next.  http://ghostscorpion.bandcamp.com/