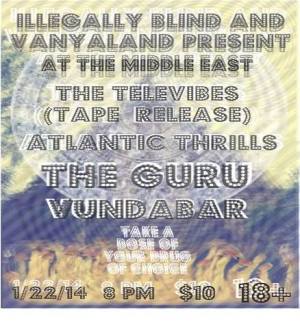 Kid/Astro – Originally, The Guru was slated to play this show, but unfortunately they couldn’t make it. No need to worry, Kid/Astro steps in as a last minute replacement and I can already hear them blasting away as I scuttle my way through the Middle East restaurant. By the time I make it to the upstairs venue space, the band’s set is nearly finished; at least, I’m able to catch a couple of  tunes. They have a noise pop quality to them, reminding me of No Age and early Wavves. I’ll keep an eye out for them in the future. http://yokidastro.bandcamp.com/

Vundabar – This isn’t the first time I’ve seen Vundabar, but it feels like this is the first time I’ve seen Vundabar.  I actually first saw the band perform at the Wilder Zangcraft in Lowell (The TeleVibes and Atlantic Thrills were on that bill too, y’all run with good crowds!) and that was way back in August, so my memory is a bit blurry. The second time I saw the dudes was in fact just last Saturday at O’Brien’s Pub. But, brother, boy ohh boy, I don’t have the foggiest….

In spite of my wayward shenanigans, oddly enough, when the Vundabars play I recognize most of their tunes. This is astonishing to me, because it usually takes me a while to remember how a song goes and the funny thing is I’ve never actually looked up their music on bandcamp or whatever. It’s like the group’s songs pitched a tent and camped out in the bowels of my subconscious, finally rising to the surface tonight at the Middle East. This is a rare feat and is a testament to the band’s ability to write a strong, distinct pop song.

With all that being said, I’d prefer it if the jams were sloppier and rougher. It’s too clean for my tastes; I liken them to Interpol, Editors, and The Walkmen – and those are all great bands, so if you dig that stuff you may just want to gobble up a Vundabar. All in all, a solid band/show.  http://vundabar.bandcamp.com/

Atlantic Thrills – Don’t even get me fucking started here. You think I need to tell you about Atlantic Thrills again? Well, apparently I do. I don’t know where you have been this whole time, but that’s okay. At least you’re here now. Last Summer, you should have spent a day at the beach with Dan Tanner, dropping acid and feeling titties while his song was on the radio. I know, you missed out. Again, it’s okay. You’re just in time for Atlantic Thrills s/t debut via Almost Ready Records. And I assure you, there will be plenty of acid and titties, more than your little mind’s eye can imagine.

It is a real exciting time for Providence’s finest. With a full- length album on the cusp of it’s official release and a month long tour (including a trip to SXSW) on the horizon,  it seems anything is possible for the Thrillz. Fourteen shows deep for this guy and I can safely say it’s not enough! Glen and I have really grown to love and appreciate these songs over the years.

Tonight’s set is splattered with nearly all album cuts, those very songs we have held so close to us since 2011/2012. I can remember standing in this very spot, in front of the stage at the Middle East Up and being stoned out of mind as I first heard the 60’s slow dance ballad, “Foreign Lands” and thinking it sounded like Against Me!’s “Baby, I’m An Anarchist.” Or better yet hearing my favorite Thrilz number, “Lie to Me”  (or “Lies” as we traditionally know it) and feeling like someone took the Black Lips and the King Khan & BBQ Show and hucked them in a blender. So yes, I’ve been to my fair share of Thrillz shows and this is one of the best, from the band and the crowd. Though, these dudes always kill it, but the crowd response varies in the sense of movement anyway. For this show, there’s plenty of dancing and some fun moshing, especially during set closer, “Acid Rain,” yeah that dirty one will do the dirty trick.

P.S. I love Dan’s Back to the Future reference! YOU KNOW THAT NEW SOUND YOU’VE BEEN LOOKING FOR, WELL LISTEN TO THIS! http://www.atlanticthrills.com/

The TeleVibes – You vibin’ hard or hardly vibin’ at all? Well, The TeleVibes (or The Tellies as I like to call them, no band is safe from my obnoxious nick names!) will take care of you, fix you up real nice. Perhaps, a hot towel, some reading material, and their brand spankin’ new EP Washed Up available on cassette via 456 Records.

Yes sir, these kids are busting out heavy, psych POP with a knack for savage SURF ROCK. It just makes my cold blood tingle and my ass jiggle. That kind of rhymes, ehhh…. I can’t help but feel sorry for anyone that hasn’t  heard this band yet. We see a lot of bands, but there’s only so many that make us want to keep coming back for more and more, until we are completely stuffed and barfing all the way down Central Square, terrifying  uptight, working class hipsters that want  to remain clean, what a little puss. The TeleVibes are rock ‘n’ roll done right or wrong, which makes it right or wrong, I don’t know, I lost myself at vibin’.

A  big shout out goes to the trippy, multicolored beast known as the Lysergic Factory Light Show, making everything look pretty and far out for all the bands, making them look even prettier. This is especially true for the Tellies, adding more flavor to their joyous rock ‘n’ roll show. My favorite moment is when Scott Loring (bass) and Charlie Northern (guitar/vocals) hop off the stage and onto the floor to rock out with the crowd of demented moshers. Good times. Meanwhile, Christian Hardy bashes away at the skins like they said something derogatory about his mother.

Favorite song? The titular “Washed Up” is my pick. Damn, that bastard will haunt you. That fucking guitar riff is priceless, it will creep up on you like a spider that crawls all around your balls sack, sliming it’s way into your asshole. All you can do is twitch and moan, twist and shout “GET HIM OFF ME! GET HIM OFF ME!” If you’re not vibin’ by now, I’m gonna have to sick that  damn spider on you. Listen up: http://thetelevibesofficial.bandcamp.com/