The Monsieurs – Here at KLYAM we are suffocated by “garage rock” and “garage punk” and don’t even get me started on “garage psych.” At this point, we could drown in our vomit’s worth of garage. You may ask, “do you ever get sick of listening to this same style of music with bands ripping off bands that ripped off bands that ripped off bands that ripped off some poor black guys? The answer is yes and no. Yes, hearing garage all the time can be tedious and can surely make it difficult to warm up to fresh, young blood. But, no we are far too young to be cynical to say that “it all sounds the same” and sometimes it just takes a special band to make everything all right. The Monsieurs are one of those bands and they are ever so special. As one Cory Bell (SKIMASK, Funeral Cone, Ancient Filth) predicted, KLYAM seriously digs The Monsieurs!

The Monsieurs are a Boston based three piece – Andy Macbain on vocals, Hilken Mancini on guitar, and Erin King on drums (King stands up and smashes at her bass less kit a la Melanie and Peaches from Fagettes). Andy’s a real bad ace, we’re talking one kewl cat, I mean woahhhh daddy damn. He looks like a pimp (and could be) straight out of a blaxploitation flick (though he is white) – black shades, fur coat, funky hair, chewing gum, and pacing around the room like a caged cheetah  that’s finally been let out and ready to rock like it’s no one else’s business.

Andy claws around, singing/screaming in everyone’s face and carrying a mic stand with him the whole time. Since I’m standing in front of the stage, he nearly knocks me out with the damn thing on several occasions. Andy spends much of this set on the floor, rocking around the somewhat empty crowd (at this point in the show, the audience is still building up and various patrons are just arriving, grabbing a drink at the bar, etc.). Glen thinks the band would fair better in a smaller, up close, and personal setting. I concur. Though, I got plenty up close and personal with The Monsieurs. Andy even kneels down and whispers sweet nothings in my ear at one point during the show.

As far as that good old fashioned, 60s garage/bubblegum pop styled rock ‘n’ roll goes, The Monsieurs are some of the best dishing it out around town. In particular, “Kari Ann” stands out to me tonight. It’s quite the ditty. Listen to all the ditties here on their album Rock the Night. Trust me, this one’s a keeper. http://themonsieurs.bandcamp.com/album/rock-the-night-8-song-digital-album

Hellshovel has a similar garage aesthetic as the other two bands on the bill, but they are a lot more laid back and mellow. It’s actually bizarre psych garage music. Spacey. It’s cool, but doesn’t burn a fire in my heart like The  Monsieurs did. Still, I recommend you check out their stuff here: http://slovenly.bandcamp.com/album/hellshovel-hated-by-the-sun-lp 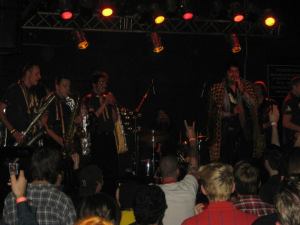 King Khan & The Shrines – Ahh the build up before King Khan is like no other. All the Shrines are out on stage, decked out in all black, wailin’ away as the crowd cheers loud and louder until the King finally arrives. Dressed in black and gold, the King summons his sensational shrines and the band bursts into perennial show opener “Land of the Freak” OWWWWWWW!!!.

This is our fourth time seeing King Khan & The Shrines, so we know what to expect, but the show still remains magnificent. And in terms of the set, it’s precisely what you want from the grandaddy of them all. A sweet mixture of all the vintage Shrines tunes spiced up with some fresh cuts from the band latest effort Idle No More (Merge).

I’m as ecstatic as ever to hear my favorite King Khan & The Shrines songs, but I really dig the way King introduces each hit with a tiny hint as to what the band will play next. “This next one is for all you big girls” (“Took My Lady to Dinner”), “This one is for all you poor people,” (“Welfare Bread”), and best of all a new ballad for those rabid animals we lay to rest, especially Jay Reatard and Lou  Reed (“So Wild”). You forgot Marcia Wallace (Edna Krabappel) King! So wild. RIP to all.

I may simply be forgetting – it’s been so many shows now – but, this may be the first time I’ve ever heard the band play the slow, doo woppy love song “Fool Like Me,” one of my favorites and a real pleasure to finally hear live.

Per usual, King Khan & The Shrines puts on one of the best shows you will ever experience, but the crowd could be a lot better. Sure, people are dancing, but there is not enough movement, not enough hysteria. This is King Khan people! On the other hand, when King Khan returns for the encore – in cape –  the disciples start moshing and bashing back and forth to the sounds of  “Born to Die” (a newbie from Idle No More). Next is “No Regrets,” and finally we leave with the classic “Live Fast Die Strong.” LIVE FAST DIE.