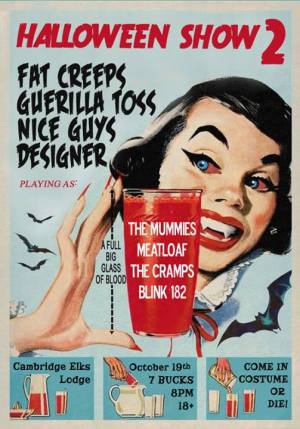 Designer (as Blink 182) – Up until now, I haven’t had the pleasure of seeing Designer live. I can’t even say I have listened to their music before. I know, I know, it’s on my never ending to do list. They appear to be the talk of the town and over the last few months or more I have heard their name pop up several times in many a local band recommendation. So, I still have to see what all the hype is all about, but regarding this cover set as Blink 182  the band is a knock out.

Designer are under dressed – shirtless and down to their skivvies, wearing only black masks. They have Blink 182’s reckless, adolescent abandonment down to a tee. I myself am not a Blink fan, but you really don’t have to be to enjoy this set. The Designer dudes subvert Blink’s pop punk flavor, turning the radio friendly hits into nasty bolts of noise that vaguely resemble the originals. I recognize “What’s My Age Again?” “All the Small Things,” and half of “Mutt.”

Nice Guys (as The Mummies) – The Nice Mums – the artists formerly known as Alex, Jake, Matt, and Cam – are covered in toilet paper and dressed in white suits appearing as though they are Mummies, though they look and behave more sinister than that. I’m feeling A Clockwork Orange; they’re up for anything, maybe a bit of the old ultra violence, which they dish out on their instruments and each other but not on the crowd members. After all, these are Nice Guys, excuse me I mean Nice Mums, sorry, Nice Mums.

Alex hollers on lead vocals and torments his keyboards, frequently picking them up and swinging them in the air, sometimes within the middle of the audience. Matt,  Cam, and Jake destroy on guitars and drums – also screaming on backing vocals. The crowd eats it up with some of the best moshing I’ve ever experienced at a Nice Guys show. I mean Nice Mums.

The Elks Lodge is a fantastic place to participate in a sweaty garage punk performance. There’s no stage or other goofy big rock club bullshit, thus lending itself to a more intimate atmosphere typically found in a crowded basement. It’s easy for performers to hop back and forth between the audience and the “stage,” breaking down that demonic divide between performer and spectator. With this band, we’re all one or at the very least there’s a feeling of inclusion that should be a focal part of any great punk/DIY show, and more importantly it’s fucking fun!

The whole set is a blast, an aging garage guru’s wet dream. No, I never saw The Mummies in 92′ old man, but I did catch the Nice Mums in October 2013 in all of their filthy, beer soaked, keyboard demolishing glory.
You Done Mummies well.
http://niceguys666.bandcamp.com/album/mean-songs-demo

Fat Creeps (as The Cramps) – I got a big kick out of last year’s Halloween show when the Creeps played as one of my all time favorite bands, The Ramones! In terms of Fat Creeps Halloween cover sets, I didn’t think that show could be topped… and honestly I don’t think it has, but this one comes close!

The line up includes Mariam aka Lux Interior, Gracie aka Poison Ivy, and special guests Ben Katzman (bass) and Chris Geller (drums). Mariam slithers and slimes her way around the elks lodge floor, singing, shouting and flailing about in her leopard skin suit. She does an impressive Lux Interior and performs well with her co-conspirators.

Gracie (red wig and all) rocks out on guitar and seductively shakes her head and hips to the music. Chris pounds on the drums in the back like a champ, dressed in all black like all bad ass motherfuckers. Ben races around on bass, shirtless, often hopping into the audience, even crowd surfing at one point. Towards the end of the set, he drops his trousers, wearing nothing at all. Haha ohh boy.

Overall, the crowd is really into the Fat Cramps, in particular one Glen Maganzini tries so desperately to get a good mosh pit going, with some attempts better than others.

Guerilla Toss (as Meat Loaf) –  His name is Robert Paulson. His name is Robert Paulson. His name is Robert Paulson. That’s right, that’s Meat Loaf as Robert Paulson aka Bob with the bitch tits in Fight Club. And that’s about it as far as KLYAM knowledge of Meat Loaf goes. Ohh, he was also in South Park once and had a big selling album or something. But, tonight it is Guerilla Toss who is Meat Loaf, and like all G Toss (are we the only ones that refer to them as G Toss? I hope not) shows this one is spooky, alluring, amusing, and altogether head scratching. Alas, the Satanic lords of the underworld have cursed us with a shitty subway system that leaves Boston incredibly early and we missed at least half of the band’s set (not to mention during the first half, I could barely see over everyone’s heads, I’m only 5’3, help a brother out). Apparently, we missed Simon naked, we always do. I have a feeling there will be more of this though…
http://guerillatoss.com/

Enjoy this video from the amazing Avi Paul Weistein below. Avi shot many videos and pictures of this show. You should take a gander at all of them. Here’s the Nice Mums…