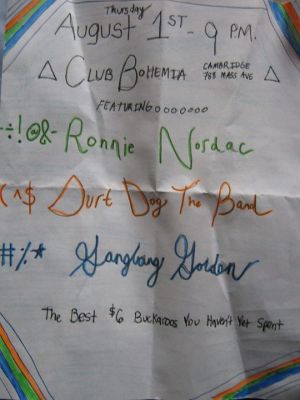 So, I was not present for this wonderful, most likely life mutilating experience :(. Fortunately, Papa KLYAM viddied the whole show on his old school, analog, 1991 VHS styled camera. Good work sir! And with documentation being the name of the game I just had to write about the thing. In other words, this is technically not a live review, but rather a review of the performance via video. Ok ramblers, let’s get rambling.

Firstly, GBG’s appearance is slightly different here. This time, he eschews the regular GBG garb (blonde wig, corona hat, shades, etc), wearing a casual shirt and shorts instead. Secondly, he is joined on stage by local musician and pal, Ben Tan on drums. Together the two bash through a set of standard GBG tunes including “Damn Shame,” “Passed In My MCAS Exam,” and my favorite “Life at the ABC,” a song by and for the working man. Another notable number comes in the form of a cover of Girls of the Gravitron’s “Weird World,” an obscure song from an obscure band; nonetheless, GBG captures it’s weird spirit.

In typical GBG fashion, the outside rocker runs around the venue, on and off the stage, playing on the floor, creating piles of feedback and often hasslin’ the audience in the process. Thankfully, the crowd is rather warm and receptive with shouts and cheers, oohs and ahhs alike. The biggest response comes when he unleashes his epic Spanish rapcore ditty “Orguello de Rappers,” bringing the mic with him out on the floor, rapping directly for the people.

The set concludes with GBG and BBT (BIG BEN TAN) simultaneously boppin’ the drums, each with one drum stick in hand. The crowd eats it up and applauds while the pair step forward, bowing for their audience in mutual appreciation.

The music is mellow, may even make you reflect upon your life up until this very moment and what great music doesn’t do that anyway? I don’t recall if they play it or not (gimme a break I’ve only seen the video once!), but “Rat Traps” off the album Weight is one of my favorite things right now in life. It’s encouraging, like when you are riding your bike for the first time as a child (no training wheels) and you realize that the mailman is no longer holding on to you, you’re doing it all by yourself… and now you’re desperately trying to get away from the mailman. Heavy stuff. Listen to the Weight and everything Durt Dog here: http://durtdogtheband.bandcamp.com/album/weight

Golly. That’s the best word I have to describe the music of Ronnie Nordac. Golly, what a fine young man we have here. Fine with his long, black hair and shades like Joey Ramone. I imagine in High School Ronnie was constantly getting chased by all the girls.

“Gosh, I’d love to go to the Enchantment Under the Sea Dance with you Ronnie Nordac!” Of course you do, sweetheart.

Ronnie Nordac lives life the way God intended us to: eating pizza, drinking 40s, and making out with babes. Paradise. In fact, Ronnie would fit in well with the Garden of Eden crowd; plinking away on his guitar, whilst Adam and Eve hop around naked – save for the green leaves on top of their crotches, and naturally they will be tongue wrestling, sipping on 40s, and emptying pizza box after pizza box. No heart attacks, no hang overs, no HIVs, just Ronnie. Do iT!
Listen up kids: http://ronnienordac.bandcamp.com/