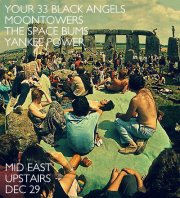 Act I: Yankee Power– Ahh, let’s take a look back at December 29, 2012. As I recall, a “major” snowstorm hit town and everyone was freaking out over the snow. Well, we braved the weather and entered the Middle East Upstairs, in intense anticipation for local favorites, Yankee Power.  The Yanks, I think that’s going to be my new nickname for them, are Jeff Gallagher on vocals/guitar, Tom Calvert on vocals/guitar, Mark Fallon on bass/vocals and CJ Kanouff on drums, and tonight they are joined by one of my best friends, the one and only, Ben “BBT” Tan on keyboards. These five upstanding gents look like ancient Greek warriors up on stage, but instead of spears they defeat their enemies with killer guitars, thunderous drums, and the frenetic keyboard stylings of Ben Tan. The idea is big.  There’s a big quality to Yankee Power’s music underneath their humble, every day man exterior.  The Yanks open with “Swing,” a flipping catchy tune from their magnum opus, Zoo Traffic, an LP that I devoured like a big chocolate cake, you know the kind that your grandmother brings out for dessert? yeah, that delicious. Listen to this bad boy right now: http://theyankeepower.bandcamp.com/ So yeah, “Swing,” one of my favorites from ZT is the first song of the evening and it’s a great rockabilly, country tune, an Elvis man’s kind of song.  They then pick up the pace with “Adopted Love Doll,” another stand out from the aforementioned album, there’s also a slick music video to accompany it. http://www.youtube.com/watch?v=uorPdif39qs  With ‘Adopted’ the band rocks out even harder; it’s a heavier jam with howling lead vocals from Jeff and excellent backing vocals from Tom and Mark.  Not to mention CJ’s powerhouse drums.  This song and all the songs actually, translate very well in a live setting.  ZT has a nice, clean production style, and often when that is the case with bands, their songs don’t have the same impact when performed live, but with these dudes that is hardly the case.  The Yanks don’t simply mimic their studio work, but they produce a live set that is equally stunning.  I honestly can’t think of anyone around that I can compare to these dudes. My only comparisons are the best of the best in the canon of  rock and roll, many of which the band clearly derives their sound from. Two of which they cover; Neil Young’s “Cinnamon Girl,” which is outstanding and lives up to the original and The Beatles (or “The Be Atles”) “Hey Bulldog,” my favorite Beatles song and a fitting one (being on the Yellow Submarine soundtrack) considering the band also plays a select batch of “children songs,” including a tune that places the listener under water. Use your imagination! Other memorable moments (for me) include Jeff’s humorous, robotic-like dancing (Glen compares this to that of The Lovely Feathers) and Tom’s classic, shouted line “they’re insincere in all the answers they give” in the track “Real Folk.” Moral of the story, go see Yankee Power, listen to their music, and please give your mom a kiss goodnight, and an extra one for me.

Act II: The Space Bums– Space Bums are quite different from Yankee Power. While Yankee Power play more straight forward pop/50s-60s rock and roll odes, Space Bums seem to be more fixated on the technical side of music. I mean actually I don’t know, I really don’t know what the fuck I’m talking about, I’m just jerking off with my words. I’d say this band would appeal to people that like jam bands or The Grateful Dead.  I like some of the Dead, but I’m not a Dead Head, that’s just too much for me.  Moontower Tim Cushing, one of the many Wakefieldians performing tonight, switches back and forth between drums and guitar. Until now, I didn’t realize he was in The Space Bums, so it’s nice to see him up on stage again.  I’m having trouble remembering specifics from their set, but this is the only time I’ve seen them.  “Acid Girl” is a pretty catchy tune. Check it out and all the rest here: http://thespacebums.bandcamp.com/

Act III: Moontowers– Here’s a band I’ve been meaning to see for almost a year now. BBT and Tim Cushing are back again on the keyboards and guitar/vocals, respectively. They are joined by several other kids from my hometown of Wakefield. Some of which I have seen perform many times over the years, but not in this band. There is also a mysterious girl on sitar laying down in the middle of the stage. I don’t think I’ve ever seen a sitar in person, it’s about time. With Moontowers, it’s a big affair. There are so many bodies on stage, it’s hard to keep up, I lost count. But, they all jam together like one big family. They also have that psych/jam thing going, and I guess the most obvious comparison that could be made is to The Velvet Underground.  Moontowers are like apple pie, just when you think you’ve eaten, it’s eaten you. http://moontowers.bandcamp.com/

Act IV: Your 33 Black Angels– Your 33 Black Angels come all the way from New York for this show, so they really have to brave New England weather to get here. These fellas fit very well with the other bands on the bill and have a similar sound. They seem to have more energy than anyone else and people appear to be more into them than the other bands. The set goes on longer than I would have liked, but I guess they make it worth their trip. It’s not exactly my deal, but I can admire them for their musicianship. I also dig the Fat Creeps shirt on one of the members, that a boy! http://y33ba.bandcamp.com/