Act I: Fat Creeps– Fuck, this past week I have been blasting the Fat Creeps EP I purchased last Friday and I have just been in this Fat Creeps zone for a while now. It takes me back to when I caught Black Lips fever back in ’08, and you can see how that turned out…  Intensely listening to the FC recordings has made me love their music  even more. Perhaps I have not painstakingly analyzed every line of their lyrics like some jokers I know (haha jk!) but I definitely have gained a bigger appreciation for these tunes. So yeah, hearing the songs live tonight is just another shot of Fat Creeps in my life. It is funny cuz when I hear “Leave Her Alone,” (especially towards the end) all I can think of is John Travolta injecting heroin into his arm, a lovely image. “Sex Beat,” The Gun Club cover you motherfuckers ought to know by now is definitely beefed up tonight, the band rocks pretty fucking hard and it is zee best rendition I have heard from them. Jim Leonard pounds those damn drums. I am paying close attention to his drum-work like a wacky detective and I like it, dude keeps a steady beat. Man oh man, the whole band rocks… a little too good. Like I was given some drug ahead of time (minus the drugs already in my system), that’s the way I feel when I see/hear these Creeps. You can’t deny the power of a fantastic pop song like “Nancy Drew,” another cool detective. Earlier in the evening I had a conversation with some lads about the excitement of seeing bands live and how I get a boner every time I get to see a favorite of mine; a No Bunny or a Black Lip or a Deer Hunter, if you will. Well sir, I go bananas whenever I can see a fat creep (or three) and it has been six times now and it’s just as splendid, I am grateful for that. Seriously, cannot wait for the next show. Until then, take it easy, where we’re going we don’t need roads… http://fatcreeps.bandcamp.com/ 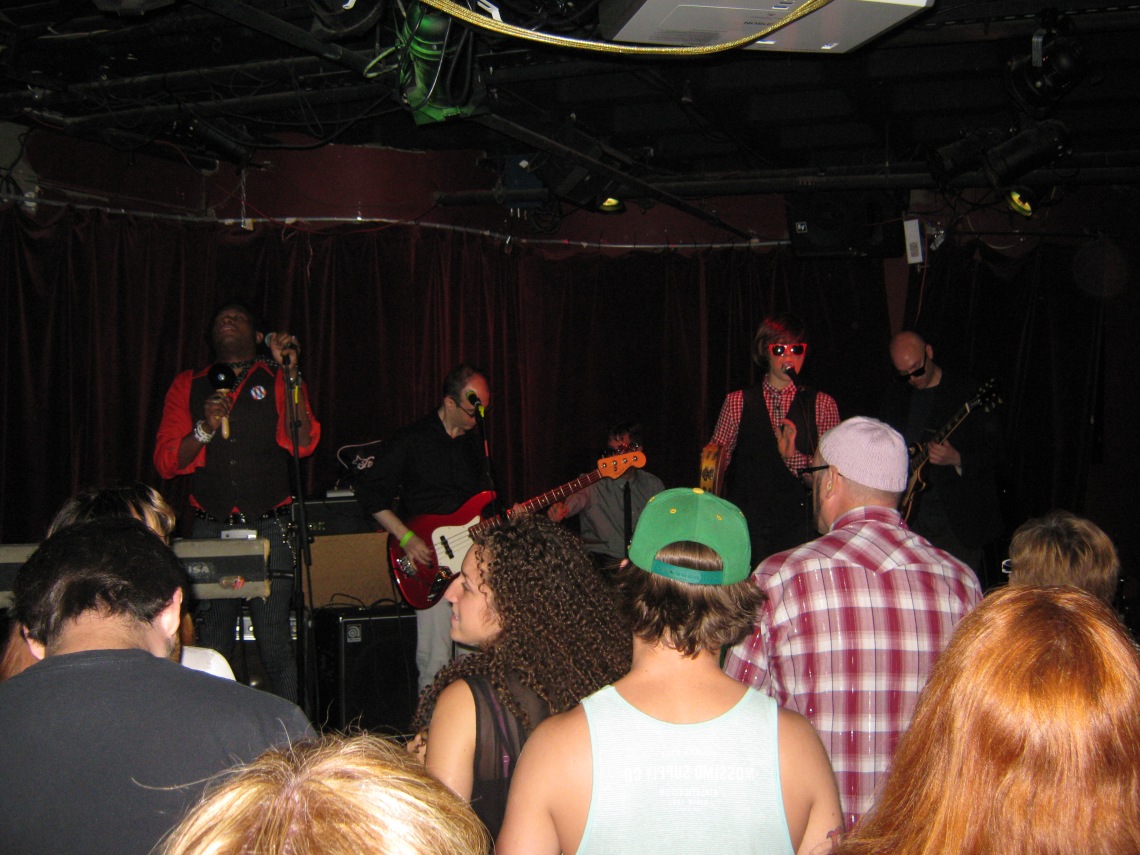 Act II: Electric Mess–  Electric Mess came all the way from New York and I am glad I got a chance to catch their set. I enjoy their straight up rock ‘n’ roll  sound, delivery, and overall attitude- who can’t forget their dress; ties, Beatles-esque hair doos, and the whole nine. Electric Mess have a slick, garage sound, wow I don’t think I have ever used those two words in the same sentence before! EM is a fun, energetic band and they keep up the momentum Fat Creeps initiated. The lead singer is especially outgoing, dancing in the crowd during one of their songs. Not as solid as their openers, but still a cool group to check out, here’s their BandCamp page:  http://theelectricmess.bandcamp.com/

Act III: Muck and the Mires–  Hell yeah, the rock ‘n’ roll continues with Muck and the Mires!  These dudes seem to generate the most reaction, with plenty of dancing  from various femmes in the audience. In fact, I would say that Muck  and the Mires brings out the MILFS at a Boston rock show or at least the overwhelmingly attractive older women at a rock show. Muck’s set is filled with fabulous odes to The Beatles  and they really just capture the good time vibes of that era altogether. I cannot say I am as spastic  as a  schoolgirl in Liverpool  1963, but hey Muck and the Mires can put on damn  fine show and for that KLYAM salutes you. (Raises PBR as a token of appreciation). http://www.muckandthemires.com/muckhome.html